On Thanksgiving, It’s All About the Stuffing 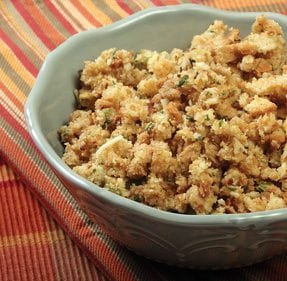 My mother Margaret has always been a skilled, if not groundbreaking, Thanksgiving cook.  Her stuffing recipe came right off the Pepperidge Farm bag and was embellished only with a little extra celery and pepper. She baked half the stuffing inside the bird and cooked the rest in a dish. Blended together, it was just right.

For 30 years, I took that stuffing for granted. It wasn’t until my first Thanksgiving dinner away from home that I realized the emotional charge of a family tradition denied.

In August of 1988, my wife and I packed our babies up and moved from Northern California to Austin, Texas for my first on-air job in television news.  By the time Thanksgiving arrived, we were well acquainted with our next door neighbors and agreed to bring our two families together for Thanksgiving dinner.

As the day approached, it occurred to me briefly that this first major holiday away from home might feel strangely small and sedate compared to the loud, chaotic gatherings I was accustomed to.  With five brothers and sisters, numerous cousins, aunts, uncles and significant others, Thanksgiving at my parent’s house was more like a stationary St. Patrick’s Day parade.

This might be a juicier story if I could share my recollections of tearful confrontations that spoiled the day. But I recall no slamming doors, fistfights or accusations of infidelity when the pie was served.  One or another of us might have gotten a tad over-served on occasion, but Thanksgiving dinner at 141 Golden Hind Boulevard was reliably wonderful. This year, I’d be missing all that and so would my wife and children.

My anxiety at being 2,000 miles away from home on Thanksgiving was eased  by the excitement that my wife and I could now create our own holiday tradition. Between the Garrett family on one side and the Justices on the other, we’d be a party of 12.  Being in Texas, Pinot Noir might not play as big a role as it did before, but we’ll just drink sweet tea. It’ll be great. Then came the stuffing.

Kids are amazing, aren’t they? They meet every experience on its own terms.  To our then 2 year old, Caitlin, and 1 year old, Patrick, food either tastes good or it doesn’t. Butterbeans have no back story.  There are no mincemeat memories. Sweet potatoes are just sweet not bittersweet.

When it came time for the blessing, I could feel an astringency rise up in my sinuses like when you take a little chlorinated pool water into your nose. Being the host and not sure if my new neighbors were Baptist or Branch Dividian, I delivered a brief, nondenominational benediction and we set about eating. Only then did I realize that the cooking responsibilities had been divvied up in a most unfortunate manner.

My wife Sandy, with two decades of restaurant experience, took dominion over the turkey.  Blake and Lois Justice were on pie patrol. Bill Garrett brought some beer and Margie Garrett made the stuffing.  It was an abomination.

Now Margie Garrett is a perfectly lovely person, a schoolteacher and devoted mother. She knocked on our door with an armload of housewarming gifts the very day we moved in.  But at that moment in my own dining room, those qualities did nothing to excuse her decision to put ground beef in the stuffing.

I may have stopped chewing. I may have gone bug-eyed with the shock of it. I don’t remember and nobody seemed to notice anything amiss. I do remember looking down at the heaping portion of beefy stuffing on my plate and emptying the contents of my mouth into a napkin.

Without a word, I stood up and made my way to the bedroom, shut the door and started weeping. All the homesickness and nostalgia I had bottled up in the three months since leaving San Francisco came pouring out.  I moved out of my parent’s house when I was 19 years old, but in some ways, I never felt fully grown up until that Thanksgiving.

Assuming I had just gone to the bathroom, no one came back to check on me. It took a good 10 minutes to pull myself together, so they must have thought I was having a different kind of problem. When I returned to the table, Sandy and the kids looked at me quizzically, but no one commented on my red eyes or unusually long absence.  I poured another glass of tea and joined the party.

In retrospect, I realize that my condemnation of Margie Garrett’s ground beef stuffing was unfair.  Rick Perry would probably come unglued with a spoonful of my mother’s version. And in any case, the stuffing was only a symbol for the loss of a family life that would never be quite the same again.

What I know now is that food is tradition and tradition is family.  The hereditary quirks and habits that make each family unique reinforce our intra family bonds, but they also make exploring the wider world so much more interesting.

I just wasn’t ready to explore stuffing with ground beef.

Sandy, Caitlin, Patrick and I have enjoyed 22 beautiful holiday seasons since that emotional day in Austin.  Our extended family is coming to Tampa from California for this Thanksgiving. We plan to experiment with different preparations for the turkey, vegetables, potatoes and desserts. My mom will make the stuffing.

McLaughlin is an Emmy award winning anchor and reporter. He has been the evening anchor for ABC Action News since 1994.