Out of the Tears of Babes 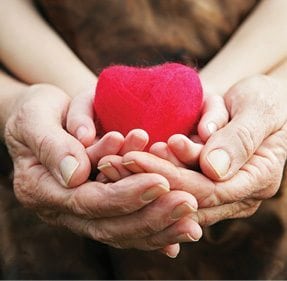 It was Christmastime 2003. The house was filled with 20 adults and a dozen children. Holiday lights twinkled. The tables were filled with delicious treats. Laughter mingled with the sound of Christmas jazz over the stereo. I couldn’t have been filled with more holiday spirit, but I was wrong. I was about to learn an important lesson about the spirit of giving. It’s a lesson that still brings tears of joy to my eyes. It began when my 9-year-old daughter Lexi burst into my bedroom in tears.

I was behind closed doors changing out of the raggedy Santa suit I wore to hand out gifts to children in our secret Santa giveaway. Lexi came inside and closed the door so the other children wouldn’t see her crying. I knew she had gotten the gift she wanted from Santa because she helped me pick out the gifts. Then she explained the cause of her anguish. “Christina didn’t like the Busch Gardens passes she got from Santa, so I traded my gift with her,” Lexi said.

My daughter gave up her SpongeBob SquarePants pen, sticker and stapler set. She traded it for the theme park passes even though Lexi already had annual passes to Busch Gardens.

I walked outside and saw an older girl happily playing with the gift I had singled out for my own daughter and that’s when I got it. My daughter gets it. Lexi understood the incredible spirit of giving. She had the power to make someone else happy even if it hurt her to do it. Lexi has been teaching me how to do a better job of helping others ever since.

When she was 3, we started teaching Lexi about the importance of giving. I would take her with me when we would drop off food to the local food bank. Along the way we would talk about why it’s important to share our food and old clothes with people who need them.

By the time she was 4, we were pulling her wagon around the neighborhood, collecting cans of food for the needy. It’s easy to teach preschoolers how to help others. I’d tell Lexi, “When you’re hungry, you want something yummy to eat. Imagine how icky you would feel if you couldn’t get something to eat when you’re hungry. We share our food so other little boys and girls won’t feel icky and hungry.”  We never spent a lot of time telling Lexi how important it was to share. However, every time we wrote a check for a charity or bought Girl Scout cookies we explained why it’s important to help people in our community.

By age 7, Lexi was old enough to pick up trash during the Great American Clean-up. Here’s where the rubber meets the road moms and dads. You are your children’s ultimate role model. At this age, and even younger, your children want to do what you do. If they see you getting down and dirty picking up trash, volunteering at school, or collecting food for the hungry, they will want to join in.

At 8, Lexi was collecting for UNICEF and selling candy for PTA fundraisers. By 9, Lexi rocked my world and gave me that Christmas memory I will never forget. She was giving on her own.

As a tween, Lexi sorted food at the food bank. As an adolescent, she learned how to shop for underprivileged people. For Black Friday, my 13-year old insisted on heading out to toy shop for needy children. It was a chore I used to do myself. Now I had a shopping partner.

There comes a time in most teenagers’ lives when their parents become the dumbest, meanest, most insensitive people in the world. That happened in my family. Lexi wanted nothing to do with me. She would not hug or kiss me. She would answer questions with monosyllabic grunts. But we always managed to spend time together at Metropolitan Ministries around Thanksgiving and Christmas, helping other people feel a bit better over the holidays. It made us feel good too.

The years really do go by in a flash. Lexi is now a senior in high school and a frequent volunteer at the leading local agency for helping homeless families. She has gone on multiple mission trips to help rebuild and renovate homes across America. She decided to do this on her own, joining the youth group at the church. She joined numerous service clubs in school, many times roping me in (and I was glad to be roped in) to volunteering on weekends. Lexi has now surpassed me in the sophistication of her charitable causes. At 17, she collected “Loose Change to Loosen Chains.” It’s an international effort to fight child slavery and sex trafficking. I had never heard of the charity until she hit me up for a donation.

You may not like the charities or causes we chose to be involved in. But as parents it’s important that you find something that interests you so your children can become interested with you.

If times are tough because of the economy, pick a cause that does not cost anything. Your time is the best gift you can give. Help the battered, visit the elderly, support the animal shelter or sort food at the food bank. Remember, if your children are old enough to understand the concept of sharing, they are old enough to learn how to give their time, effort and love to others.

Germaise was the first news reporter hired when WFTS became an ABC affiliate in 1994. He has won numerous awards for his news reporting and was in or near the eye of every major hurricane that hit Florida in the mid-2000s.