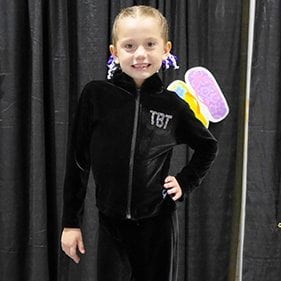 Olivia Lucas began gymnastics when she was nearly 3 years old. The South Tampa resident quickly took to the sport and began competing regularly. By the time she turned 8, a normal week for Olivia consisted of at least nine hours of practice, plus an hour or more of extra coaching. Then last fall, Olivia started complaining of pain in her left knee.

In November 2014, Olivia was diagnosed with Osteochondritis Dissecans (OCD). The American Academy of Orthopaedic Surgeons defines this as a condition that develops in children and adolescents’ joints when a small piece of bone begins to separate from its surroundings because of a lack of blood supply, resulting in the bone and covering cartilage cracking.

“The most common sports injuries in children are overuse injuries,” says DeLucia, who specializes in sports medicine and exercise-related injuries.

DeLucia has a condition to match every sport: Gymnasts like Olivia (DeLucia’s patient) are frequently diagnosed with OCD. Basketball players most often come to her with Osgood-Schlatter Disease, a stress injury to the knee cap tendon caused by repeated jumping. Soccer players suffer from Sever’s Disease, which is heel pain caused by a stress injury to the bone in the foot. The bane of baseball payers’ existence is Little League elbow, pain on the inside of the elbow caused by repeated throwing.

“What they all have in common is that they are injuries where the bone grows,” says DeLucia.

These injuries occur on the growth plates—areas of cartilage located on the ends of the bones—which can be torn or broken by repeated pulling and pushing. DeLucia sees these mostly in children ages 10-16. This is when they are playing the most and also when they are going through puberty, with their bones undergoing spurts of rapid growth.

Warm Weather Equals Year-Long Training, Leading to Stress
DeLucia moved to Tampa Bay from Chicago, where she says that the natural rhythm of the seasons dictated an ebb and flow in activity for different sports so children mixed it up as a matter of course. In Florida, a sports season can be year-long. And because of the increasingly competitive nature of children’s athletics, children often supplement team practices with private coaching sessions to hone particular skills, adding time that they are again repeating specific motions. Kids rarely expect to show up on the first day of school and make it on the school soccer team, for example, if they haven’t already been playing on a traveling team all year.

Because children start playing at such high levels of intensity earlier, they have already racked up so many years of overuse by age 10 that the number of sports injuries are higher than ever, DeLucia says. (Kids younger than 10 who come in with sports injuries usually tend to have more collision than overuse injuries, she says—broken wrists and shin bones, for example.)

“The stakes are higher; the level of competition is higher,” says DeLucia. “Children and parents feel the pressure to do activities year-round to the detriment of children’s health and muscles and bones. Kids don’t go out and just play anymore. They are little versions of professional athletes. They literally never take a day off.”

As well as overuse injuries, DeLucia sees start-up injuries often, and these coincide with the start of school and a sports season. Kids who have been sitting around all summer are suddenly pushed to high levels of activity to accommodate the season, and subsequently show up in her office with tendonitis and stress injuries.

Girls also are showing up in larger numbers with sports injuries, perhaps because more girls play sports competitively than ever before. DeLucia explains that girls have wider hips and looser joints, and this can indicate a need for different conditioning than for boys. There has been an 8-fold increase in the numbers of ACL ruptures compared to boys, she says.

However, although she may suggest sitting out a season or two, DeLucia never suggests pulling a child out of a sport; partly because that suggestion is met with stiff resistance.

In fact, with obesity levels hovering at 19.9 percent for children ages 6-11, involvement in a sport is an excellent thing. “I certainly encourage every child to be active in an activity or a sport in some way,” says DeLucia.

So what can parents do?
For a start, enroll children in a mix of two or three sports throughout the year for cross training. Involving children in a variety of sports will help lessen overdevelopment of some muscles and a resulting imbalance. Kids can also sit out an occasional season in a particular sport to give themselves a break.

To prevent stress injuries, DeLucia suggests ramping up activity gently rather than jumping in. If a child is going to start a sport at the beginning of the year, they should start warming up well before. For example, a dancer whose normal practice is two hours three times a week should begin with a 20-minute practice three times a week at least six weeks before she starts the season. She can then increase her level of activity by 10 percent a week until she is at the full level.

Kids in any sport will also benefit from strength training year-round, says DeLucia, and this can be as simple as having them do squats, lunges and push-ups.

“Strong muscles are more supportive of joints,” she explains. “The biggest injuries are not because of contact or equipment. They are intrinsic to a person. It’s because [the athlete] is tired and in pain, [or] not rested or conditioned.”

Parents also should be alert to any mention of pain, especially if it lasts into the next day. They should watch for changes in form and technique—a change in tennis serve for example. If a child shows decreased interest, “that’s their own body telling them to stop, and we need to listen to that,” says DeLucia. “It’s better to get minute aches and pains checked out rather than [have it develop into] a big career-ending injury.”

For Olivia Lucas, the OCD was not the end of her problems. She broke her right ankle this March, possibly because her right leg was overcompensating for the other, which was in a knee immobilizer for the OCD. Olivia walked on the broken ankle for two weeks before going to a doctor, partly because like many athletes, she’s inured to working through pain, and also because she and her mother put her aches down to growing pains. Now, Olivia’s mother, Susan Lucas, says she’s learned that you’ll never have a growing pain in a joint. She’s taught her daughter to listen to her body and communicate with her mother if she feels as though something doesn’t feel right. Also, she plans to enroll Olivia in swimming lessons.

“A lot of my daughter’s [gymnastics] teammates swim or dance,” she says. “Ironically, they do more, but I guess their bodies are better balanced and they are rarely out with injuries.”

Today, Olivia’s cast is off and she’s undergoing physical therapy. As soon as her leg has completely mended, the third grader will head straight back to her mat.

“She’s ready to get back,” says her mother. “She’s not used to not being active.”

For more information on treatment options for sports-related injuries or to schedule an appointment with a pediatric sports medicine physician at St. Joseph’s Children’s Hospital, visit StJosephsChildrens.org.