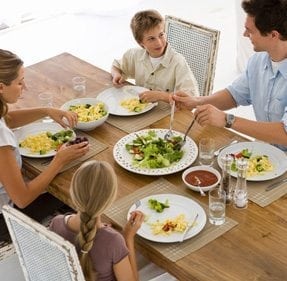 As a journalist, I keep my political views to myself. My employer doesn’t pay me to share opinions and my audience expects me to stick to the facts. But they’re in there. And because I often cover political stories for ABC Action News, I’ve always been interested in the question of where people’s political inclinations come from.

Do our family, friends and neighbors determine our eventual party affiliation in same way that we become Dodger, Yankee or Red Sox fans? Or is our position on the political dial set in part by our genes as several credible studies suggest? I believe we all arrive at our opinions on abortion, the death penalty, taxes and welfare in different ways, but parenting is always in the mix.

I don’t recall often discussing politics at the dinner table with my parents and siblings. We did talk about the issues of the day. The Vietnam War was raging and the backlash against it was raging at home. My two oldest brothers were subject to the draft lottery, making the war feel close and personal. As a World War II combat veteran, my father understood war and did not want his children to have any part of it. Mom and Dad bore little resemblance to the shaggy haired youth on the front lines of protest, but they wanted us out of Vietnam as much as any anti-war protester.

In other ways, my parents were more typical of their generation, trusting in our nation’s leadership, church-going and conservative in dress and demeanor. But they were never dogmatic or inflexible. I picked up on that in their willingness to listen calmly to whatever stray notions we kids brought home. They approached every discussion from several directions and never ridiculed our opinions, however ill informed. Sometimes, to my astonishment, they actually seemed willing to reconsider their opinions based on ours. And as they grew older, my parent’s views on many issues changed with the times, though they never wavered in their dedication to fairness, kindness and dignity.

Like most people, my high school and college years cemented my opinions on social and economic issues into a definable political orientation. But the lesson I learned from my parents was this: hold fast to values not opinions. Think through your beliefs and listen with an open mind and heart.

My wife and I tried to bring that ethic to our own parenting. Politics was never a taboo subject at our dinner table. In fact, my wife and I used that time to share news of the day and encouraged our son and daughter to join in the discussion. Up until the age of 8 or 9, they typically ran off as soon as the meal was over while Sandy and I chatted on. Then we noticed one or both would key in on our grown-up conversation and return to the table.

Talk about a teachable moment. As they matured, they asked questions, then ventured opinions, weighing what they heard at home against differing points of view from teachers and classmates. Explaining our own long-held positions forced us to be clear and logical while respecting other opinions that we did not share.

As it turned out, my worldview is today no more than a few degrees off from my parents. And my children’s outlook is not far from mine. I truly admire the independence of thought of my friends (liberal and conservative) who came to embrace a political philosophy different from their parents. John F. Kennedy and Ronald Reagan had that influence on many young people during their time and undoubtedly changed millions of party affiliations.

There’s little doubt that political beliefs are shaped in large part by our family, school, church, community and culture, including the media. And despite the sense that kids discount everything their parents say by half, the truth is they are listening. They’re also watching to see if our political talk matches the way we live our lives.

Brendan McLaughlin has been the evening anchor for ABC Action News since 1994.