Paw Patrol LIVE is coming to Tampa and the star is from Tampa Bay! 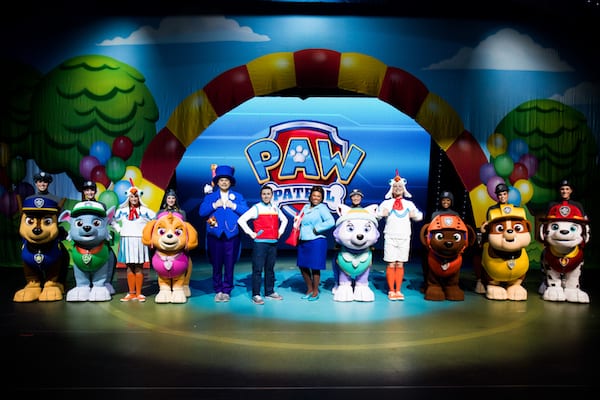 That’s right…your child’s favorite cartoon is about to come to life on the big stage in a performance where clapping and dancing is expected and encouraged! Audience participation is pretty much a MUST!

We were pretty excited when we found out the show was coming to Tampa, but our interested really piqued when we discovered that one of the stars of the show,  Brianna Hill, who plays the part of Mayor Goodway, is from the Tampa Bay Area!

We wanted to learn more about the show and about Brianna, so we sent a few questions her way as she prepares to head back home to Tampa Bay!

Tell us about the show!

It is up to Ryder and the Paw Patrol to find Mayor Goodway and help Adventure Bay win the race! Everyone can expect a pup-tastic time while cheering on the Paw Patrol with the Pup Pup Pom Poms that are given at the beginning of the show!

Paw Patrol Live “Race to the Rescue” is a very interactive show where audience participation is highly encouraged.

What is it like to be a part of this show and bring a popular cartoon to life?

Brianna: It is an honor being a part of this incredible company for multiple reasons! Paw Patrol Live!takes the television show and brings it to the stage!

For some children, this is their first introduction to live theatre and that in itself is rewarding!

Nothing compares to the excitement and energy that comes from the audience once the curtains opens and the children see their favorite pups.

There’s a point in the show where my character gets to talk with the children in the audience and it so humbling seeing their eyes light up knowing that their voice is heard and their opinions matter!

How did you get involved in theatre and any words of advice for kids with theatre aspirations?

Brianna: I got involved in theatre in middle school and decided to pursue it after doing a high school production of AIDA!

It was the first time I experienced pure joy doing an assignment that could become a career. I figured if I can make this a serious commitment, then why not entertain people for a living!

For students who would want to pursue acting I would advise to just do it! Florida has one of the biggest thespian festivals for students, Floria State Thespians. It is a great opportunityfor networking and researching different theatre styles.

After that I would say find an undergraduate program that fits the individual and go for it! Also, get comfortable auditioning because that is the brunt of work to find employment.

Any other fun facts you want to add?

Brianna: One of my favorite experiences was having my niece and nephew watch Paw Patrol Live!They have been fans of the TV series for some time. They are the reason I originally audition for the show!

Brianna is a professional performer born and raised in Punta Gorda, FL. She began her training at Florida Southern College, where she graduated with a BFA in Theatre Performance and BS in Business Administration with a focus in Theatre Management. Brianna continued her education at Playhouse on the Square as an Administration Intern, then New Stage Theatre as a Performing Apprentice, where she toured all across Mississippi. She then received the opportunity to perform as Mayor Goodway in the 2018-2019 season of Paw Patrol Live: Race to the Rescue! Brianna is so excited to come back for a 2nd season!

Brianna starting performing at the age of eleven and never stopped! She was honored to produce her own One-Woman show, The Truth of the Matter, at Florida Southern. Additional credits include: Odd Couple: Female Version (Olive; FSC), Steal Away (Bluiah Daniels; New Stage Theatre), A Midsummer Night’s Dream (Queen Titania; FSC), and Collective Rage: A Play in Five Betties (Betty 5; FEMMEmphis).

Brianna has been inspired by icons such as Whoopi Goldberg and Shonda Rhimes. Her most memorable role to date is Woman in The Truth of the Matter. When Brianna isn’t performing she enjoys going to the theatre, reading, writing, watching the news and joking with friends.

Brianna is incredibly grateful for this amazing experience. Her friends and family are an incredible support system and she loves them dearly. Brianna would specifically like to thank her mother, for believing in her while also encouraging her to follow her dreams!