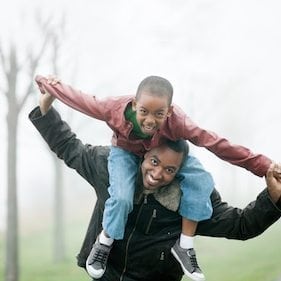 My husband Randy will be the first to tell you he has done a lot of things wrong as a stepfather. He has been a stepparent to my two daughters for almost two decades, and his stepdaughters love him dearly. But it hasn’t always been that way.

My youngest daughter Jodi was 3 when we married. Jamie was 5. Randy had a difficult time with Jamie from the beginning. She didn’t want another dad in her life, and she made that clear to him.

He overheard a conversation between the two girls one night in the bathtub during our first year of marriage. “I hate him, too. I can’t believe Mom married him,” Jamie told Jodi. There was little love, or even like, between Randy and the girls in the beginning.

Randy tried hard to make up for the dysfunction of their biological dad. Insisting he would be the dad they didn’t have, he jumped into the parenting role too quickly, encountering resistance and rebellion with every move. He was surprised to find his efforts backfire, creating confusion and chaos for him.

During our second year of marriage, Randy left the house one evening and called from a nearby hotel. “I’m not coming home tonight. I’m not sure I’m coming home again. I can’t cope with the ongoing conflict between me and you and the kids.”

It was a tough season. Randy brought two children to the marriage also and attempting to blend our four kids, ages 3-10, while learning how to stepparent and parent together proved harder than we anticipated. But neither of us wanted to endure another divorce. Randy and I began counseling that year to work through the bumps.

As we moved into the elementary years, Randy developed a rhythm with the girls. A natural comedian, they loved his sense of humor and began to accept him as another parent in their lives. Bonding between him and the girls had been slow but no longer seemed impossible. The relationships among the four kids blossomed and life appeared manageable again.

But the teen years were just around the corner.

As a teenager, Jamie challenged us at every turn. If Randy punished her in the slightest, she threatened to call Child Protective Services. She ran away more times than I can remember (but thankfully never went far). After one particularly aggravating day with defiant behavior, Randy took Jamie’s cellphone and threw it to the ground. As it busted into several pieces, Jamie began yelling at us both. The night didn’t end well. And I wasn’t sure the sun would come up the next day.

But it did. And Randy didn’t give up on his stepparenting journey with Jamie.

When she reached driving age, Randy wanted to teach her to drive. She tested every ounce of his patience. They would come in from a driving session hardly talking to one another, Jamie’s anger brewing over. But the next day, they were back at it again.

During her high school years, Jamie participated in competitive cheerleading. Randy would jokingly say, “Do you call cheerleading a sport?” The ongoing drama with other cheerleaders, out-of-town competitions, and continuous suction cup to his wallet threw Randy into stress overdrive. His grumpiness overshadowed his joy at times. But he didn’t quit supporting Jamie and the things that made her tick.

As Jamie left for college, I’ll never forget her words to him. With a huge hug and a smile on her face she said, “Thank you for being such a great dad to me. I love you!”

Jamie recently returned from an eight-month missionary journey in Mozambique, Africa. She left in early summer and we knew it would be difficult to communicate with her while she was gone. However, as I suspected, she made sure to call on Father’s Day, despite the seven-hour time difference between us. When Randy answered the phone, I saw tears in his eyes as he listened to Jamie recount life-changing experiences knowing he had contributed to her stability and maturity that enabled her to now make a difference with others. She closed with the words every stepfather loves to hear, “Happy Father’s Day, Dad. I love you. I miss you.”

Do you have to be a perfect stepparent to have a meaningful relationship with your stepchildren? No! Randy’s stepdaughters, Jodi, now 21, and Jamie, now 23, love their imperfect stepdad.

How did that happen?

Randy never quit. He got up when he fell down. He sought help when he needed answers. He cried. He prayed. He struggled. He fought. He apologized. He forgave. He smiled with gritted teeth. But he never quit.

Is it a cycle? Yes. You take one step forward and two steps backward. You celebrate a season of growth and then start a season of despair. You gain the insider status one day and feel like an outcast the next.

Does that mean you failed? No.

Stepparenting is tough. Mistakes are made. Misunderstandings happen. Variables outside our control influence stepfamily relationships. But there are new tomorrows, a fresh start to work through differences. Hope for harmony.

As a stepparent, you’ve been given an opportunity to influence a young child’s life like no one else can — in an imperfect way.

Are you up for the challenge? I hope so. Because my husband will tell you there are rewards to stepparenting, even when you’re not perfect, but oftentimes they’re at the end of the journey. As the Japanese proverb says, “Fall seven times, stand up eight.”

Gayla Grace is an author and stepfamily coach with a his, hers and ours family. She loves helping nontraditional families learn to thrive in their relationships. Visit www.stepparentingwithgrace.com.