“Pop Goes the Rock” at the Mahaffey: Marvel, Music and Madness by Chris Kuhn 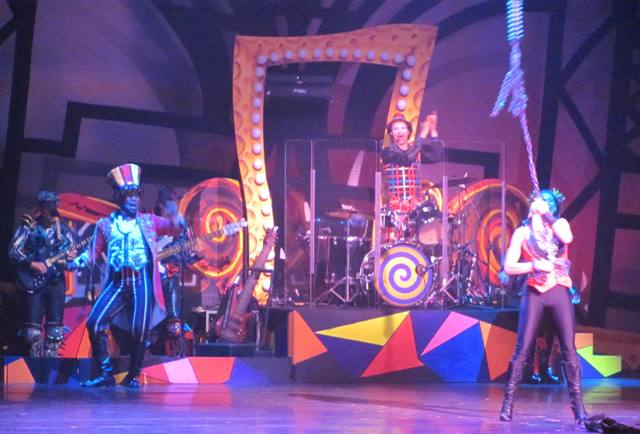 Last night, the hubby and I ventured over the bridge to downtown St. Petersburg and Mahaffey Theater for the debut of Pop Goes the Rock, a new colorful spectacle of lights, music and human acrobatic feats from Cirque Dreams, led by founder and artistic director Neil Goldberg. In addition to its April 10 premiere, the production has two more shows at the Mahaffey, April 12 and 13. A few years ago, we had an opportunity to catch the troupe’s seasonal showcase Holidaze when it visited the Bay area’s Straz Center. This time around, the soundtrack was rock and roll, not Christmas carols, and spanned the decades – from Roger Miller’s classic “King of the Road” to 80s Pointer Sisters to Brittany Spears, all sung by a cast and onstage rock and roll band decked out in a rainbow of color and showered in every possible sparkle, glitter and bronzer known to man.

The program describes the setting as a funhouse. Whatever it is you’re watching as an audience member, you are quickly mesmerized by the tremendous energy and sound before you onstage. I recognized some faces (or should I say FEATS!) from the previous show I’d seen including a foot spinning duo, a pair of gravity-defying strongmen who wowed the crowds and a couple of cylinder stackers with impeccable balance who left many jaws on the floor of the theater even after dismount.

One highlight for our crew of two: a confounding and seemingly “magical” quick dress change behind the pass of a single draping when voila! In an instant, the woman’s dress changes colors before our eyes…multiple times! I witnessed this quirky and devilishly entertaining little “trick” on “America’s Got Talent” a few seasons ago and am still talking about it (and just as confused) years later. Like the rest of the audience, we too were big fans of the young man who perhaps garnered the biggest applause of the night as his partner spun him in the air repeatedly using only his feet and incredible body strength and muscle control to the cast’s rendition of Dead or Alive’s “You Spin Me Round (Like a Record)” – to the point where many of us were wondering if this poor boy would ever be able to stand straight again without tipping over from dizziness. Astoundingly, after what clocked at well over a minute of nonstop rotation, the young chap sprang off his partner’s feet and onto the floor as perky and alert as ever. I try to use the word “amazing” sparingly but this act calls for it. Seriously.

If you’ve seen a previous Cirque Dreams production, expect to see a few returning acts you’ll recognize from other shows that have simply been dressed up in new music and costumes. It doesn’t take away from the spectacle but it is something you should be aware of in advance. I found that those couple of acts I did recollect were just as exciting to watch the second time around in their new setting. If you’ve never been to a Cirque Dreams production before, prepare for lights (lots of them), colorful and outlandish sets and costumes, plenty of music and acrobatic feats – from ambitious tightrope cyclists to stunt skaters to romantic tandem aerialists overhead. You won’t find a complex plot or provocative message woven throughout, but you will get a fast-paced, entertaining feast for the eyes and a melodic journey of many flavors, one that can taste sweet one moment, a little maddening the next, but always interesting a la Alice in Wonderland.