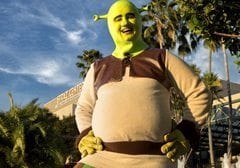 The Patel Conservatory Theater department presented, Shrek the musical! An engaging and fun-filled adventure for the whole family. Based on the Dream Works Animation Motion Picture and the book by William Steig. Originally produced on Broadway by DreamWorks Theatricals and Neal Street Production.
The story takes place in a far away land where a big green Ogre, lives in isolation in an ugly swamp; after being mock and feared all his life. Suddenly a group of homeless fairy tale characters arrived to the swamp saying that they have been evicted  by the power seeker little Lord Farquaad.  Shrek  bothered by the villagers, offers to give them their homes back if they give him his swamp back. Shrek travels with a talking donkey who befriend him.  When Shrek meet with Lord Farquaad in the land of Duloc, the Lord said he will give the fairy tale characters their home back if Shrek rescues princess Fiona, who is locked in a  dragon guarded castle. Shrek and Fiona find that they have a lot in common and after a burping and farting contest they fall in love. And Donkey and Dragon become friends.
The talented and confident cast portrayed the characters feelings, strength and weaknesses, their different personalities and styles of interacting with excellence. There are many leading and supporting roles including Sherk, a peaceful, loner, cranky and resilient Ogre (Christian Meany). Fiona, a strong- willed, down to earth, cursed beautiful princess (Meghan Leger) who sings so high that birds explode. The playful talking donkey (Harrison Mootoo) who speaks the truth in a sassy yet trustworthy loving way. A powerful, but lonely, obsessed dragon (Shalyah Fearing). Lord Farquaad (Caleb Quezon) an insecure, arrogant, lavish leader with an exaggerated sense of importance. Pinocchio (Justin Knisley), Gingy and Bakers wife (Madison Potantus), the three little pigs and many other beloved fairy tale characters evolve from a stereotype mind set to a growth mindset were they see different options, posibilities, love and accept their uniqueness.
Some of the story themes highlighted in play were: inner beauty is what really counts, friendships can emerge from the most unlikely pairs, and uniqueness is something to be celebrated.  The cast amazed the audience with an interpretation of the story that was fun, engaging and nurturing.  This was a fantastic production directed by Suzanne Livesay, the Patel Conservatory Theater and Music Department Chairwoman.
Musical Director Kavanaugh Gillespie lead students through a variety of music genre with great energy. The repertoire included choral, pop ballad, R&B, and catchy pop rock. “Big bright beautiful world”, “Story of me”, “Morning person” I think I got you beat”, “I am a believer” are some of the songs interpreted with superior quality. Choreographer Scott Daniels draws inspiration from broadway pieces, classical and popular dance and guide the full cast through several creative, exciting and timeless dance moves to express uniqueness. The sets, lights, sounds, makeup and costumes provided were outstanding.
The audience enjoyed the comedy and responded with laughter and tears of joy. They were blown away by the superior performance and the over all students  enthusiasm, focus, singing range, acting techniques and dancing skills.This theater performance was very detail, much better than the movie.
The Patel Conservatory offer classes in acting, voice and dance. It is a place that brings together students from different backgrounds, from as many as 12 schools through out Tampa Bay and Pinellas County. This instruction further develops their potential and empower them to audition in the professional theater world.
Share
Facebook
Twitter
Pinterest
WhatsApp
Previous articleFun with Fruit Kabobs and Fruttare
Next articleCaring for Concussions

Fourth of July is just a few days away and there are some amazing events going on around town this weekend! We've rounded up...
Read more
Family Fun