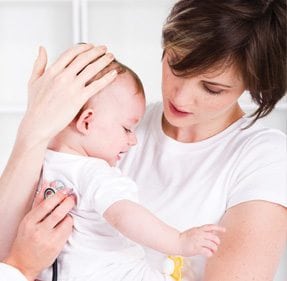 When 4-week-old Ella woke up with a slight fever and congestion, her symptoms pointed toward the common cold. As the day progressed, the baby’s breathing became labored and she refused to eat. Her pediatrician suspected Ella was fighting something more than a cold and a nasal swab test led to the diagnosis of a viral infection of the lungs and breathing passages called Respiratory Syncytial Virus or RSV.

“We were already worried about the fact that Ella would have to battle a cold at such a young age, but our concerns were increased further with the diagnosis of RSV,” said Ella’s mother Kellee Kudzinski. “Like many parents, we didn’t know a lot about the condition or how common it actually is.”

According to David Rosenberg, a pediatric pulmonologist at St. Joseph’s Children’s Hospital, RSV is the most common cause of lower respiratory tract infections in infants and children younger than 2 and virtually all children contract it by age 3. RSV season typically starts in the fall, peaks in the winter and begins to decline in early spring.

“In most cases, RSV causes mild, coldlike symptoms, such as nasal stuffiness, cough, wheezing and sometimes an ear infection,” says Dr. Rosenberg. “But in premature babies and children with compromised immune systems, RSV can develop into serious respiratory conditions like pneumonia and bronchiolitis.”

The Centers for Disease Control and Prevention reports that about 125,000 of the children who are diagnosed with RSV each year require hospitalization. Fortunately, most cases of RSV are mild and require no specific treatment from doctors. With a mild case of RSV, your pediatrician may recommend that you treat your child’s symptoms at home in the same way that you would treat a bad cold.

In more serious cases, the pediatrician may prescribe medications to help your child breathe more easily or may even recommend hospitalization. If your baby is at high risk for developing RSV, which includes being premature or suffering from heart or lung disease, your pediatrician may recommend a medication that can be injected monthly to help prevent it.

RSV is very contagious and the virus can live on hands and clothing as well as on hard surfaces such as countertops and doorknobs. It can spread when a sick person blows their nose, coughs or sneezes.

Due to Ella’s age and the severity of her condition, her pediatrician admitted her to St. Joseph’s Children’s Hospital, where she spent three days.

“No parent wants their child to be sick much less hospitalized, but knowing she was getting the specialized care she needed by experts really helped,” Kudzinski says. “Thankfully Ella is now a healthy, active 2-year-old, and although she’s had her fair share of colds, we’ve hopefully seen the last of RSV.”

Dr. Rosenberg recommends the following to help protect against RSV.