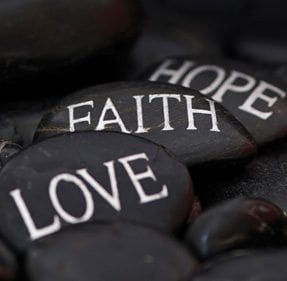 One of the greatest blessings of my job is meeting wonderful people in the community. Sadly, sometimes that happens in the worst circumstances.

That was the case when I met Lorraine Yaslowitz. She is the wife of slain St. Petersburg Officer Jeff Yaslowitz. Lorraine, who does not like to be called widow, agreed to an interview shortly after her husband’s death in 2011. Jeff was gunned down while trying to assist with a search warrant in January of 2011. He wasn’t even supposed to be there that day; he volunteered to cover a colleague’s shift.

I remember Lorraine talking about his death and being so amazed at her strength and deeply touched by her faith.

“God had a plan and had to use him to do it. I can’t explain why. I know this whole scenario was put there for a reason and God was in control the whole time,” Lorraine said.

Deeply moved, I returned to the station and began the process of putting together my pieces for the newscast that evening. Due to the time constraints of a half-hour newscast, I could not use all of Lorraine’s quotes. I admired the strength it took for this amazing woman who just lost her husband to share her feelings with us. I felt compelled, out of respect for her, to share her entire message. So, I decided to stay late that night and transcribe her entire interview for our website, abcactionnews.com. I didn’t realize it at the time, but this was the beginning of something huge. Could this woman of faith and strength turn a tragedy into a triumph in her husband’s honor? If anyone could, it was Lorraine. I had no idea at the time, but I was about to play a key role in helping her dream come true.

Shortly after, Lorraine asked a friend of hers to reach out to me. That friend was a race director named Chris Lauber. Lauber was also deeply moved by her tragedy. Lorraine wanted to honor Jeff and she thought the best way to do that was to establish a foundation. She wanted to call it something special that symbolized their relationship.  Lorraine decided on Partners for Life.

She imagined hosting a run because it was a passion she and Jeff shared.  Lauber relayed her dream to me. Immediately, I took action because that is what our station does. I sent the idea to General Manager Rich Pegram. The team at ABC Action News rallied around the idea, and along with the tireless effort of Lauber, a partnership was born.

ABC Action News was honored to sponsor the first annual Partners for Life Police Appreciation Run on May 15, 2011.  It took place in downtown St. Petersburg during National Police Memorial Week. I had every intention of being there. Then Lorraine asked me to run the 10k with her. I do have a passion for running, but quite frankly, I was out of shape. How could I say no?  It was important to Lorraine. I wanted to be there to support her, honor her late husband and pay tribute to all the men and women who have lost their lives in the line of duty.  It was time for me to get back in shape. Still, I was so nervous, but on race day, I laced up my shoes and hoped for the best.

It was a very special day with Lorraine and Jeff’s three children cheering us on, along with his K-9 dog Ace, and Jeff’s parents and two sisters.

I began side by side with Lorraine. However, I was dragging about two thirds through.  I looked up at the sky and the greatest warmth along with determination filled me. I know many of you may be skeptical, but it was as if Jeff was encouraging and giving me the faith in myself to go on. I rounded the curb and there was Lorraine. I’ll never forget what she asked me, “Are you feeling what I am feeling? That Jeff is watching us?” I am also a woman of faith, but this moment cemented my belief. Lorraine and I crossed the finish line together but this partnership was far from over.

Now, we are getting ready to lace up our shoes for the second annual run.  It will take place in downtown St. Petersburg on May 6.  This year, the family is mourning another loss, Jeff’s father Harvey. He passed away almost seven months after Jeff’s sudden death.

“I just couldn’t believe this was happening to me. It was almost like you get this gut wrenching pain, then you feel wonderful knowing that they are there with God and just not with us right now. I know one day we will be there, but right now I am here,” said Lorraine.

And being here means focusing on her cause and her children. Lorraine took a year off from her teaching job to focus on both. Her nonprofit foundation has taken huge strides and she is proud of that. “When Jeff died, we had so many people helping us both financially and personally. Not everyone has that support and that’s why this foundation was formed.”

The foundation’s first check went to the family of a slain St. Petersburg security guard, Matthew Little. Lorraine explained, “I know exactly what the family was going through. I just want to help and hopefully make a difference.”

The Partners for Life Police Appreciate Run is the major fundraiser. Last year, the first-ever run drew hundreds. The race is a healing process for many and, for others, it’s a chance to honor those who put their lives on the line everyday to protect us.

“You heal when you see the community and people you don’t even know coming together to show their support,” said Lorraine.

I’ve learned a lot along the way. We can celebrate someone’s life rather than mourn just as Lorraine has.  She reminds all of us her husband is a hero and heroes never die.

Sarina Fazan is an Emmy award-winning journalist who anchors the 6 and 11 p.m. weekend newscasts at ABC Action News.