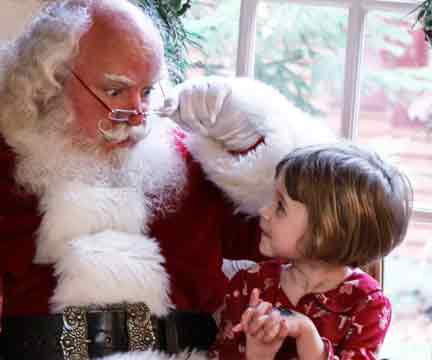 Growing up my parents went through great lengths, lies, and acts to make sure I still believed in Santa. My favorite Christmas memory was when the whole family got in on the Santa act. My sister and her boyfriend, at the time, climbed out a second story window onto the roof and stomped really loud to make it seem like Santa’s reindeer landed on the roof. My dad dressed up as Santa and my mom acted as the distractor.

I waited as any child would for Santa to come down the chimney and after a few seconds my mom said “maybe we can see him on the roof.” After stepping onto the porch, inside “Santa” let out a ho’ ho’ ho.’ Of course I did not really know the identity of who the real Santa was nor did I recognize his voice. It wasn’t until I spent a few minutes with Santa that I realized my sister and dad were no where to be found. So after several times of asking where the missing members of my family were it lead to my sister entering and leaving very pretty quickly to get ready for him leaving. When it was time for Santa to leave the distractor, as I call her, told me to open up my presents, as I had my back turned my dad escaped without me noticing. Minutes later I told my dad about how he missed the big reveal. At age four I never put the two together, but looking back it is funny to think of what parents will do to keep the spirit of Santa alive.I would like to share with you some of the funny stories and great lengths that parents go through to keep their children believing in the man in the big red suit.

A classic tradition for many parents includes biting a chunk into carrots to make it look like the reindeer had nibbled on it.

Other parents get their oldest children, who are too old to believe in Santa, in on the act.

Some go on the roof and pretend they are Santa, making all kinds of noises such as stomping, and jingling bells.

Parents that leave notes and messages from Santa sometimes end up scaring their kids.

Just saw this on my mirror. Scared the crap out of me until I realized that my parents wrote it pretending to be Santa pic.twitter.com/4HjzqZ9U

What better way to prove Santa visited then to leave some evidence.

What elaborate schemes have you performed to make sure your children continued to believe in Santa? Share any funny or inspiring acts you have performed to while filling in for good ol’ Saint Nick.