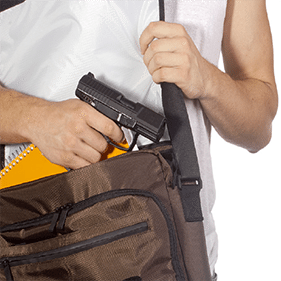 The classrooms at the University of Tampa are quiet. A clock ticks and the sounds of pencils and pens on paper joins a symphony of knuckle cracking and muffled coughs. It is a quiet, peaceful mundane day.

The professor begins talking about the history of a piece of literature, when a car backfires. A door slams. Someone runs down the hall, feet pounding on the aging carpet. The professor tip-toes to the door and quietly shuts it, turning the lock. She smiles a tight lipped smile, and calmly walks back to the front of the room. Everyone looks at each other with the same anxiety in their eyes: Is there a shooter here?

The students hold their breath as their ears strain to hear more. A laugh echoes through the hallway and all 13 students and the professor exhale. The door is unlocked, and the class resumes.

The scene seems grim, but it is a reality for thousands of students every day. A combination of shootings, like the one in October at Umpqua Community College in Roseberg, Oregon, has resulted in students and teachers leading a life filled with constant fear and anxiety.

When I began college at the University of Tampa, I was a transfer student. Coming from Hillsborough Community College where things were much different, I wasn’t sure what to expect at my transfer orientation session. The dean of students, the provost and the cyber team presented information about the school’s history, disciplinary process and how to log onto the Wi-Fi (respectively). Just as we became restless and ready to go to lunch, the head of security took the stage that had been set up on the small gym floor. He told us to update our contact information with the school so that we could receive text alerts with instructions in emergencies like fires, closures, or active shooters.

This took me by surprise. At HCC, we had heard of shootings at other schools but the safety plan was never discussed. You just lock the door and hide, right? I would soon learn that at many schools, students are taught how to hide, where to find safety and how to barricade the doors. I felt comforted by the thought that there was a plan, but at the same time terrified that we felt the need to have one. It almost seemed that the extra security gave me deeper anxiety. This is not uncommon, according to Ken Trump, national school safety expert.

“When it comes to school safety, statistically, school shootings aren’t that common,” says Trump. “We focus so much attention on shootings though, that we end up ignoring other safety issues in schools. We need to be focusing on prevention using the human element.”

Hillsborough County plays a Proactive Role
The threat of active shooters isn’t solely on college campuses. Teachers in elementary, middle and high schools are feeling the heat as well. However, instead of living in fear of shooters, Hillsborough County has become proactive in working to prevent shootings and making an action plan. Although school shootings seem to be on the rise, especially in 2015, Hillsborough County Sheriff’s Office, along with law enforcement across the country, has been involved in active shooter training for over a decade.

Smith says that SRDs have received extensive training in dealing with active shooter threats and that active shooter training is a regular part of school resource preparations. The growth of school shootings has also led to more school resource deputies being assigned, which can help put parents and students minds at ease. “There have been numerous scenario training exercises conducted in public school buildings (non-student days of course),” says Smith. “Scenario-based Emergency (tactical) Medical training has also been incorporated into the SRD’s Active Shooter Training.”

“I feel safe as a teacher,” says Mary Wilson, a fourth grade teacher at an elementary school in Hillsborough County. “Our school has a resource officer who makes his presence known around the school.”

Reassuring Little Ones
Having an open dialogue with kids about shootings in the news and allowing them to ask questions about it can sometimes take away some of the fear and anxiety surrounding these shootings as well as empowering them.

“We know families should prepare for hurricanes, tornados– especially here in Florida. With the current state of our society I think parents should also prepare their families for active shooter incidents,” says Smith. “I think parents should talk with their children about lock downs and other emergencies. We teach our kids how to swim, we teach our kids about Stranger Danger, we should also talk to our kids about what to do during lock downs, evacuations, and so on.”

Parents can prepare their children for the possibility of a shooter without scaring them. Trump suggests talking with your children openly and honestly, but preparing them for other types of situations as well instead of putting the focus on shoots alone. Smith agrees that being open with preparations can help ready kids for any threats.

“If your child is young, tell them in very simple terms what happened. If they’re older, be honest with them. Turn off the news, and really just let them talk it out with you,” says Dr. Wendy Rice, PsyD, owner of Rice Psychology. “We tend to want to know the “why,” and we tend to want to blame medicines or other things but that can be very dangerous. So let the kids know that it is okay to sometimes not understand the “why” of it.”

When kids see gun violence on TV, talking might not always be enough to help express what they are feeling. As adults, we feel fear, anxiety and sometimes hopelessness when we see shootings happen—it is no wonder kids can be so anxious. Freddy Barton, Director of Operations for Safe and Sound Hillsborough has a recommendation for helping kids express themselves after traumatic events if talking isn’t doing the trick.

“We have something called Rainbow Dance that we show kids how to do to express themselves after a traumatic event,” says Barton. “Safe and Sound Hillsborough also works on teaching parents how to respond to traumatic events as well.”

Prevention is the Best Strategy
Across the board, teachers and experts agree that the most important way that we as a community can prevent shootings is to focus on each student’s mental health and well-being.

“We need to look at violence as a public health issue,” says Barton. “When we think about it in that light, it makes it all of our responsibilities to help kids and stop violence.”

“Parents need to be super aware of who their child is friends with,” says Wilson. “And they also need to pay attention if they seem to have no friends. If your teenager is sulky and doesn’t want you around, be around anyway.”

Before pigeon-holing a kid or teen as “dangerous” or a “potential shooter”, it is important for parents and teachers and the community as a whole to do everything they can to get to know each child.

“We invest millions of dollars a year into security technology, but we need to invest into the human element of prevention,” says Trump. “If a teacher and parents and community members get to know a kid, they are less likely to feel that shooting is the answer.”

There are some red flags to look for in your kids and the kids that you interact with on a daily basis that indicate that they might be in need of help. “If kids are moody or have serious problems with relationships are just really hostile, that is a red flag,” says Rice. “If kids are isolating themselves or talking a lot about violence those are some things to look for. One thing you can do is to set limits on alone time, and spend time together as a family so that you can see what is really going on with them.”

Getting help from a psychologist early can help keep kids away from turning to guns. Safe and Sound Hillsborough also offers a community of support for kids who are thinking of turning to violence. Not only can kids learn about the consequences of violence by talking about it, but they can also participate in mock trials. They also learn that if they see something, like a friend who has a gun or talks about guns, to say something. Often, kids who are involved in shootings haven’t thought through the consequences of their actions fully, so the mock trials provide a safe space to learn more, says Barton.

“All of us have a vested interest in keeping our kids safe,” says Barton. “It is all of our responsibility to get to know the kids we interact with and to protect them.”