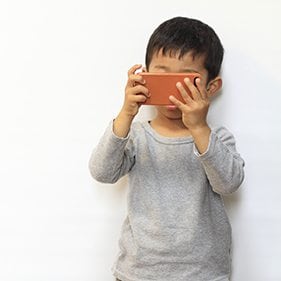 Kailey Washburn’s long blonde hair tickles her thin elbows as she leans forward and holds the Xbox One controller. She is playing Minecraft, a game that she knows like the back of her hand.

“I like this game because you can build pretty much anything on it,” she says between button presses.

Like many of the 8 year olds in her class, Kailey loves video games and technology. She can tell you the most fun apps and games to download on your phone, and she even texts and sends pictures to her mom.

“I like to Facetime with my best cousins because we don’t live that close” Kailey says.

Kailey is most certainly a digital native, kids born in the last decade. But digital native aside, her love of all things technology is increasingly common among children (and adults) of all ages.

With cellphones, tablets, computers, touch screens and more all around us, the line between healthy fun and addiction can begin to blur.

“What really defines an addictive behavior is when it starts to affect the child’s life. When the child becomes angry, anxious, depressed or even loses sleep — that is when it is time to worry,” Dr. Hammond says.

Kailey’s sister Erin Jenkins, 23, is studying to be a teacher and finds it interesting and slightly worrisome that young children like her sister have such a growing relationship with technology.

“I don’t so much worry about her going on sites like Facebook or Snapchat, she is too young for that. And I don’t really even worry about her being on Xbox Live. I just start to worry when I hear of studies that show a link between ADHD and kids who use a lot of technology,” Jenkins says.

There has been a growing link between the overuse of technology and attention issues.

“Technology doesn’t cause ADHD, but it does cause chemical changes in the brain,” says Regina Hardin, MD, owner and pediatrician at Focus MD. “When a child plays video games, they get an instant gratification, which releases dopamine in the brain in a way that homework doesn’t. So kids who can focus on video games for hours and hours may have a harder time paying attention in school,” she says. “It sets the bar very high for other activities with regards to dopamine releasing.”

While the exact cause of ADHD (Attention Deficit Hyperactivity Disorder) is not known, recent studies have honed in on dopamine and its possible role. Dopamine carries signals between nerves in the brain and aids many functions, including movement, sleep, mood, attention and learning. Research also has shown a strong genetic component for ADHD.

“If a child already has attention problems, this means that playing video games is almost a remedy, but only when they are playing. Once they are finished, it makes it even harder for them to focus on other tasks,” Dr. Hardin says.

Although Kailey does swap her screens in favor of books sometimes, she still spends a large portion of her time outside of school in front of a screen, much like 5-year-old Conner Hernandez.

Conner loves Minecraft and Terreria and his small hands move on the Xbox controller with the accuracy and speed of a fighter pilot.

Like many families, Conner’s monitors his technology use to make sure that he is staying safe online.

“I don’t have concerns because he’s monitored closely when he plays games. He uses Xbox Live but usually only to play with friends. He’s played with random kids in the past, and they tend to be bullies to each other. So we’ve limited what he can do to avoid some of that,” says Jenny Hernandez, his caregiver.

While Conner is not addicted to technology, his family still takes precautions. TV and screen time are limited, and he is reminded of the other activities, like playing outside, that he can do.

“Making sure that kids are getting outside and exercising is extremely important — especially in relation to technology. Exercising releases the same chemicals in the brain as technology and it helps combat obesity,” Dr. Hardin says.

With technology everywhere, including school, where many tests are taken on computers, it is important to recognize the warning signs that your child may be developing an addiction.

Make sure your children are not skipping homework, activities or important events so that they can be online, gaming or using technology, Dr. Hardin advises. Watch for an inability to break away from the technology or acting out if the game or website they are using is not working.

“If you are trying to take the tablet away and the child throws a temper tantrum, that is a good sign that they have it too much,” Dr. Hardin says.

It is also important to start young with preventing technology addiction.

“One way to prevent your kids from becoming addicted is to have healthy behaviors yourself. You can’t be mad at your child for being addicted to their phone when you have your phone in your hand all the time,” Dr. Hammond notes.

You also can prevent your child from becoming addicted by setting limits and not allowing them to spend hours and hours, especially unsupervised, on their devices. “Make sure that you check on them when they go to bed, too. They can sneak their tablets into their beds when they are supposed to be sleeping,” Dr. Hardin says.

One way that you can help your kids to grow a healthy relationship with technology is to get them enrolled in technology clubs or camps that teach them how to harness their technological powers for good. One local club, Coder Dojo, teaches kids how to code to create their own programs. This is exciting and more productive than just playing video games all day. It could even lead to a lucrative career.

“For parents who worry about excessive use of technology devices, a simple rule could be if you don’t build it, you don’t play it. However, that rule needs to be coupled with providing kids the opportunity to learn. There are numerous free resources on the Internet if parents want to introduce kids to building cool stuff on the Web if they can’t bring their kids to a Coder Dojo,” says Ramesh Sambasivan, volunteer and founder of the Tampa chapter of Coder Dojo.

In AlligatorZone, a free public program for school-age kids to meet startup company founders and provide product feedback, Sambvasian has noticed that children are able to relate to the world around them and more easily solve problems.

Technology is not a bad thing. When used properly, it can be beneficial to your children. Children who can fluently use technology have more resources at their fingertips when it comes to school projects or assignments. When they enter the workforce, they will be comfortable using technology. The key is using technology in a healthy way.

If you suspect your child has or is developing an addiction to technology, it is important to seek help from a mental health professional who specializes in treating children.

When it comes to technology, Kailey said it best. “Sometimes it’s too much.”