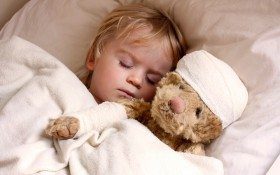 Although it may be 75 degrees in Tampa right now, it’s still cold season; and your little ones might not be feeling their best. Whether it’s a cough, sneezing, or a stuffy nose, it’s never fun to watch your kid suffer through a cold. When it comes to cough and cold medicines, your kids would rather stay sick than take a spoonful of something that tastes horrible. Plus, some cold medicines can produce dangerous side effects, according to WebMD. If you’re looking for a natural cold remedy for your kid, then look no further. Here are seven natural cold remedies, along with a couple of cold-fighting recipes.

One simple cold remedy that kids love is honey and cinnamon. Not only does it taste good, but it’s a great cure for colds, as well. Both honey and cinnamon are antiviral, antibacterial, and anti-fungal properties. All you have to do is mix together 1 teaspoon of honey (organic raw honey is best) and 1/4 teaspoon of cinnamon. Take this twice a day for three days for best results.

Does your kid have a stuffed nose? A cool-mist humidifier is the best option because it adds moisture to the room, which helps relieve congestion. Turn it on at the first sign of a cold and remember to clean it after each use. Warning: mold and mildew can build up and be sprayed into the air if not properly cleaned after every use.

This smoothie recipe is sure to put a smile on your kid’s face. Not only is it creamy and delicious, but it’s vegan, as well. This flu-buster smoothie contains clementines, which are known to ward off colds. It’s also great for sore throats.

2-3 Clementines, peeled and broken into segments

2 tbsp coconut milk (the cream from top of can)

Peel and freeze the avocado, clementines, and banana before making the smoothie. Once frozen, place all of the ingredients into a blender and blend until smooth. You may add more liquid if it is too thick. Enjoy!

Garlic isn’t just used for cooking and warding off vampires. It contains allicin, a compound that has been known to have anti-bacterial properties. Although it might be difficult trying to get your kids to eat it, there are some sneaky things you can do, such as mincing the garlic very finely and adding it to a light pasta sauce (so they don’t notice it) for dinner.

Rub Vicks Vaporub on their feet before bedtime

As funny as this sounds, it actually works! If you or your kid has a cough, generously rub some on their feet and cover them with socks before going to bed. What it does is open up the airways through the night, so there is no coughing and your kid can get a good night sleep.

I don’t know one kid who doesn’t like apple cider. What’s great about this drink is that it can cure just about every ailment known to man. This drink contains RAW apple cider, as well (don’t worry, it’s sweetened). Some of the benefits of apple cider vinegar are: helps reduce sinus infections and sore throats, promotes digestion, and helps clear up skin conditions and acne.

2 tbs of apple or grape juice

Place all the ingredients together in a glass and stir until it is all mixed together. You can add a little ice if you like. Drink and enjoy!

You’re probably thinking, “I could’ve thought of this myself!”, but sleep is so important. People tend to underestimate it because it’s part of our daily routine, but not getting enough sleep (especially when sick) is deprimental to your health. Encourage your kids to get lots of rest when they are sick because it helps heal them, due to the released compounds that boost the immune system.

Want to read more about how to keep your kids healthy during cold season? Click here: