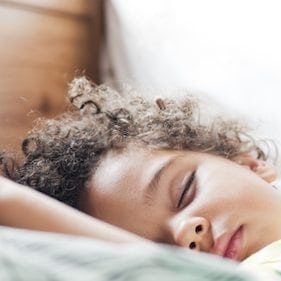 Whether you are camping or staying at a hotel, you may be in close quarters with your family this summer. This may give you an opportunity to take note of how your children are breathing when they sleep. Do they sound a little like Darth Vader? Is their breathing loud, interrupted or labored? These could all be signs of sleep disordered breathing, according to pediatric ear, nose and throat specialists (ENTs).

Dr. Thomas Andrews describes sleep disordered breathing as a characterization of sleep patterns in children, which include snoring, restless sleeping, waking at night and apnea. Medical experts add that it also can affect a child’s behavior — hyperactivity, lethargy and increased daytime fatigue. Dr. Andrews says that can often lead to a misdiagnosis of attention deficit disorder (ADD) in children.

A child with this disorder may exhibit restless sleep, tossing and turning in bed, waking in the middle of the night, sleep walking and exhaustion during the day. Parents take note – experts say it’s a behavior that can also affect siblings. Dr. Andrews explains that siblings who have to sleep in the same bedroom with the child having difficulties will usually complain about not being able to sleep well due to snoring, pauses in breathing from the child affected or their bedmate sleeping restlessly and pushing them out of bed.

How can I tell if my child has sleep disordered breathing?
Parents will usually notice this when families are together on vacation and the child is sleeping in the same room. Frequently, the child will exhibit signs of restless sleep, tossing and turning throughout the night, waking in the middle of the night (usually after midnight), sleep walking, bedwetting and tiredness during the day. Other children who have to sleep in the same bedroom will usually complain about not being able to sleep well because of the noise of snoring, pauses in breathing or their bedmate sleeping restlessly and pushing them out of bed.

What should I do if I suspect my child has sleep disordered breathing?
If your child exhibits signs of sleep disordered breathing, talk with your pediatrician about a referral to an ENT. The ENT will ask you about symptoms and examine your child. If the physical exam matches the medical history, further studies or treatment may be offered at that time. For some small children, adenoidectomy alone may be sufficient to alleviate the symptoms. However, in most cases, tonsillectomy and adenoidectomy is the treatment of choice. There are several methods. Your doctor will choose the method best suited for your child to make the best recovery possible.