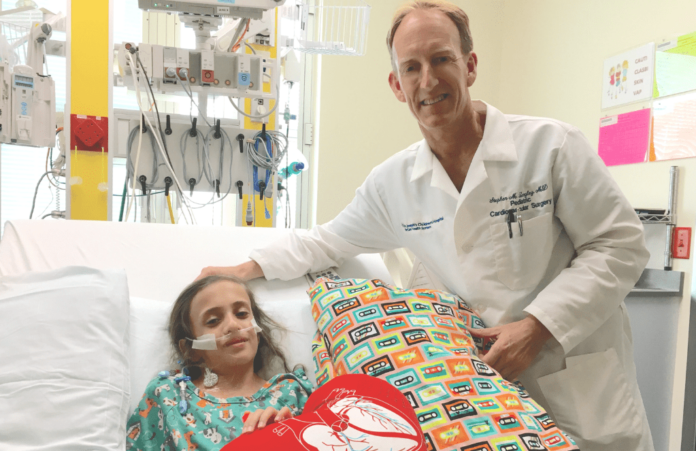 Eternal Hope: The story of one family’s proactive approach in the face of unimaginable cardiac complications

Like many expectant mothers, when Kelly Dee went to her 20-week ultrasound appointment, all she wondered was whether she was going to have a boy or a girl. Instead, she and her husband Mark were left reeling when they were told that their fetus had complex congenital heart defects, and that she wouldn’t live past her first birthday. Termination was suggested as an option.

The Dees’ reaction? They named their baby Hope—and immediately looked for a second opinion. Their search led them to Dr. James Huhta, a perinatal cardiologist at St. Joseph Children’s Hospital.

“That was the first day we didn’t cry,” Kelly Dees says.

Disagreeing with the mortality rate of 60-95 percent that the first doctor gave them, Dr. Huhta instead pegged Hope’s chances of success at 92 percent. Three open-heart surgeries later, Hope is a happy, thriving 7th-grader at John Long Middle School who loves to sing and act.

“No one doctor is a be all and end all,” Dees says today. “If your gut is telling you that you’re not fully confident, ask to be moved. You have a choice in where you get treated.”

At St. Joseph’s Children’s Hospital, not only are the success rates higher than the national average and the mortality rates significantly lower, children also get to go home much earlier—and stay healthy—than the national average. Dr. Stephen Langley, chief of pediatric and congenital cardiac surgery at St. Joseph’s Children’s Hospital, and Hope’s surgeon, explains that several factors contribute to the hospital’s excellent outcomes and record.

Every Wednesday morning, more than 30 surgeons, anesthesiologists, nurses and other specialists gather in a nearly 3- hour meeting where every patient is discussed in detail, Dr. Langley explains. “That kind of approach involving so many people is the best way to make a decision.”

Dr. Langley says he is fortunate to work at a hospital with excellent cardiac surgeons, some of whom are working at the frontiers of medical breakthroughs. “We stay with the patient through their entire life,” he says. “I like to say that the care we give is from the age of minus 9 to 99.”

As a father himself, Dr. Langley is conscious of the importance of openness, honesty and directness when dealing with parents of children with complex cardiac issues. “I do not treat the condition,” he says. “I treat the whole family. That must be the foundation of what I do as a pediatric cardiac surgeon.”

He makes it a priority to meet both parents before a surgery so they can ask questions and meet him in a less emotional setting, which helps them identify him as a familiar face later.

“To me, it’s a minimum, not an extra effort, one that really can make a huge difference,” he says. “I can reassure them that whatever needs doing, we can do it. I have children myself. Even a minor thing wrong with them, and you are very anxious about that.”

For the Dees family, this approach was exactly what they were looking for. Hope was born 8 weeks premature, weighing 3 pounds and 5 ounces. The day she was born, they found out that she also had esophageal atresia, which meant that anything in her stomach would go into lungs. So she had to be fed intravenously. She had her first open heart surgery right after she was born, and her second one when she was 9 months old. When she was 2, she was diagnosed with a mild form of cerebral palsy for which she underwent two surgeries.

In July 2016, Dr. Langley, performed Hope’s third open heart surgery in such a way that when the artificial valve he put in her heart needs to be replaced (as they wear out), an interventional cardiologist will be able to replace it by entering through a small incision in her leg, rather than having to operate on her chest again.

“This man is just magical,” Dees says about Langley. When Hope’s appendix ruptured eight weeks after that surgery, Langley stopped by to see how she was doing. “He’s such a busy man, but he visited her,” Dees says. “Hope has a huge amount of anxiety in a medical setting. She wouldn’t smile for anybody but him.”

If she had to go back and do it all over again, Dees says she would do all the research right away, check out mortality and success rates. She encourages parents to ask questions at their ultrasound visits about their baby’s heart, and to make sure the baby gets a pulse oximeter test after birth to check oxygenation.

“It’s your child; that’s your priority,” she says. “Advocate for your child. I learned to ask a lot of questions. If my gut is telling me to ask it, I ask it. No question is an unreasonable one.”

As for Hope, she turned 13 in December. She’s witty and smart, and loves her family. She’s in the chorus at John Long Middle School, and this year, she performed in a drama showcase. Dees cried watching her. “She’s a cool kid, but I’m biased,” her mother says. “She’s made me strong.”