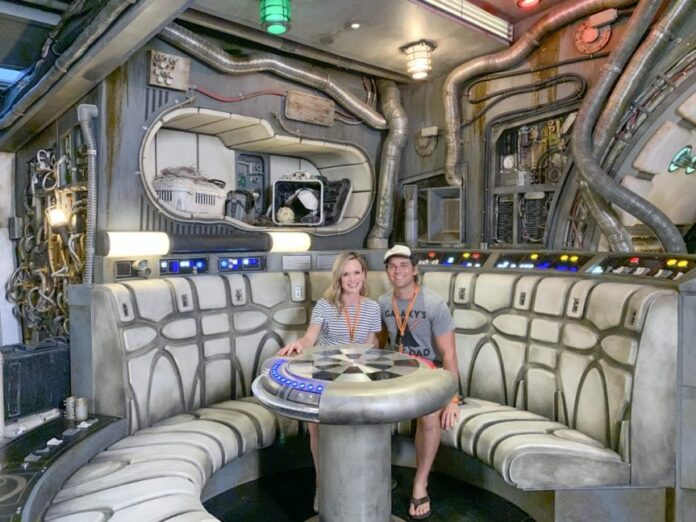 We got a sneak peek of Star Wars: Galaxy’s Edge before it opened to the public way back when, so we can show you all of the amazing things you can do with the kids to fully take advantage of your time in the NEW 14-acre land…ahem…correction, your time on planet Batuu.

To help you plan your trip to the edge of the galaxy, we’re sharing some of our favorite things to do! Watch below and/or keep scrolling for our top picks!

Our Favorite Things to Do at Star Wars: Galaxy’s Edge

Make your first stop Oga’s Cantina in Black Spire Outpost if you’re going early in the morning! Why, you ask?? Because they’re serving up a galatically awesome Bloody Mary called a ‘Bloody Rancor’ topped with a meringue rancor bone. Maybe you need a caffeine kick instead…get the Black Spire Brew, an alcohol free cold crew with honey, falernum, passion fruit and citrus.

*Make sure you book a reservation ahead of time on the Disney Parks app. It’s the only sure way to get in.

The kiddos can sip on the Blue Bantha, a Blue Milk topped with a Bantha inspired sugar cookie.

Be sure to come back later in the day for more concoctions and provisions!

We tried the Fuzzy Tauntaun, a vodka drink with a peachy-citrusy taste, topped with ‘Buzz Button Tingling’ Foam. One swig and a few seconds later, the slight numbness kicks in. It’s actually pretty cool, so don’t be weirded out by it!

Oga’s Obsession which is a cotton candy flavored dish with popping pearls, topped with dried fruit and a pop rocks type candy is another must-try! It’s large enough for sharing since it’s so sweet!

TWO: Get your holoscanner ready and be on the look out for your favorite Star Wars characters as they roam Batuu!

There isn’t a designated spot where you go to line up to take pics, or “holoscans” as they’re called on Batuu, with your favorite Star Wars characters. Remember…you are immersed in the world of Batuu. The characters are walking along WITH you, often times trying to elude the ‘bucket heads’-Stormtroopers. Be ready to take a holoscan at all times! Our favorites: Chewbacca and Rey!

THREE: Ride the Millennium Falcon, the “Fastest Hunk of Junk in the Galaxy” and Star Wars: Rise of the Resistance

You will most definitely want to Fast Pass this ride (Fast Passes not available so far in 2021) as it is in high demand pretty much the entire time the park is open. Even if you do have to wait in line, the long queue is mostly shaded and/or is air-conditioned.

There is plenty to see along the way as you wind your way around the Millennium Falcon and prepare to board the ship. 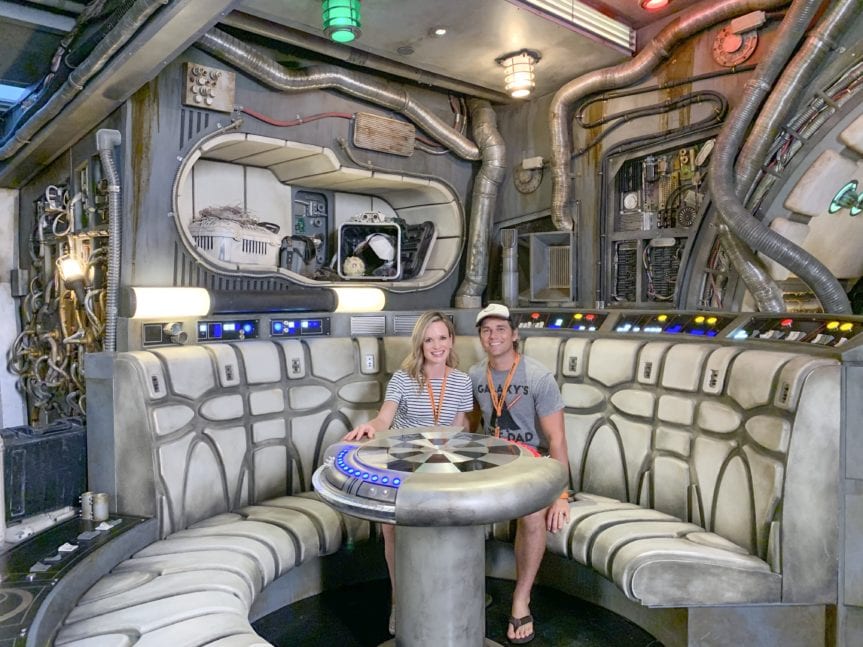 Once you step on board, sure sure to snap a holosan at the Dejarik table! When it’s your turn to fly, you and five others will assume your roles as either pilot, gunner or flight engineer.

Star Wars: Rise of the Resistance opened a few months later and it’s an immersive experience like you’ve never been on before. It’s essentially three rides in one and soooo cool! Click here to see what it’s like and some of the other new attractions at Disney’s Hollywood Studios!

FOUR: Ever wonder what Blue Milk tastes like? Find Out at The Milk Stand.

Cool off with the sweet taste of Blue Milk…or Green Milk! The frozen drinks are alcohol free, but the 21+ crowd can opt to blend in rum with the Blue Milk or tequila with the Green Milk. Both were delicious and absolutely shareable.

On Batuu, when you toast your friends and family, instead of ‘Cheers’ you say ‘Til the Spires’.

FIVE: Build Your Own Droid at the Droid Depot

This is a must-do and a great gift idea that also ties in the gift of experience! For $99 you can build your own R-series or BB-series droid that will truly be unique to you. There are nearly 280,000 possible combinations!

The droid has a control center that will allow it to interact with you and other droids, move, and more. There is even an option to purchase additional personality chips. You can even purchase a backpack carrying case that is really stinkin’ cute. You can book a reservation via the Disney Parks app.

Inside the store, you can even interact with a life-sized R2D2–which is also available for purchase at a price of $25,000.

SIX: Build Your Own Lightsaber at Savi’s Workshop

This was a really cool and super unique experience that comes with a hefty price tag (about $199 for a light saber), but worth it for die hard Star Wars fans. The experience is what made it so special. You and your fellow Jedis gather in the workshop where you will assemble your lightsaber by first selecting a kyber crystal…choose wisely. There are four colors to choose from: red, blue, green and violet.

You will then place your crystal in the emitter and add the rest of the pieces customized to your liking.

Then comes time to power up your lightsaber which is super cool as you and the rest of the builders raise your sabers in the workshop!

Again, the cast is perfectly on character throughout this entire experience. Kudos to them for making it so special!

SEVEN: Head Over to Dok-Ondar’s Den of Antiquities

You can further customize your personalize lightsaber at Dok-Ondar’s and shop unique gifts and treasures. Look up, because you’ll spot some things NOT for sale from his collection like the taxidermic wampa from “Star Wars: The Empire Strikes Back”. You’ll also find Dok-Ondar busily counting his earnings in the corner of the shop.

This place was awesome…and totally unlike any other Disney shopping experience you’ll ever have. You won’t find Mickey ears here (sorry, Mickey!). Remember, you’ve been transported away from Orlando and you are now on the outer edge of the galaxy on planet Batuu. Here, you will find nine different shops.

Our favorites were the Creature Stall and Toydarian Toymakers. You can even pick up a fan to cool off from Batuu’s two suns in one of the shops where a broken down furnace never seems to shut off. See it for yourself!

The marketplace is also where you can pick up the sphere shaped soda bottles and the sweet and salty popcorn!

NINE: Hungry? Head over to Ronto Roasters near the Black Spire Outpost

The Ronto Wraps were all the rage on Batuu. Right in the center, you’ll find a droid turning the spit of meats being roasted by the pod racing engine. We tried the Nuna Turkey Jerky which is definitely worth ordering if you don’t want anything too heavy, but still have a craving for a snack.

This is actually pretty cool and the best reason ever to finally download the Play Disney Parks mobile app if you haven’t already. There are 150 ways you can use the app around Star Wars: Galaxy’s Edge!!! You can show your support for a side (the Resistance or First Order), control droid robots, find your way around Batuu, translate signs, and so much more!

There are two pics you can take with Disney and download via Disney’s Memory Maker. The Tiny World Magic Shot is a super cool photo–be on the look out as the photographer will be roaming the park. The camera looks like a black sphere on a tripod.

Things to look for while visiting Batuu:

Disney’s Imagineers didn’t miss a thing when creating Batuu. The attention to detail is absolutely stunning and they make good on their promise to immerse you in the world of Star Wars.

There are some really cool Easter eggs to look out for like:

The dianoga in the tank above the water fountains in the Black Spire Outpost. Take a sip and it just might stir him to take a peek above water!

Look to the left of the black box under the pipe.

If you look to the ground, you’ll notice droid tracks! Disney artists used rubbings from the original R2-D2 droid’s feet and made trolleys to roll into the concrete before it was dry!

We are also loving the addition of water bottle refill stations in Batuu!

Inside Arendelle: Frozen Dining Adventure on the Disney Wish

Imagine being invited to Arendelle Castle to celebrate the engagement of Queen Anna and her Kristoff. That’s what you’ll experience aboard the...
Read more
Family Fun