Staying Ahead of the Curve 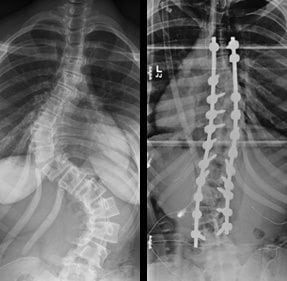 For nearly two years, 16-year-old Elicia Collier had a feeling that something just wasn’t right with her back. An active teenager involved in cheerleading, track and basketball in the past, she initially thought the discomfort might be related to a sports injury.

When the pain increased at a rapid rate, a trip to the pediatrician led to the diagnosis of a severe curve to the spine also known as scoliosis. In December, Dr. David Siambanes, an orthopedic surgeon at St. Joseph’s Children’s Hospital, used metal rods to straighten Elicia’s spine, which had curved to a nearly 75-degree angle.

According to the National Scoliosis Foundation, about 6 million Americans have some form of scoliosis. Though anyone can be affected, girls are at a slightly higher risk than boys.

“Scoliosis can first appear in young children or even infants, but most often it shows up during middle to late childhood — a time when the spine and the rest of the body goes through a growth spurt,” says Dr. Siambanes. “Signs of scoliosis include an elevated shoulder blade, a waist that is lopsided and/or hips that seem unusually high.”

In most cases, scoliosis arises for no apparent reason, which is referred to as idiopathic scoliosis. Occasionally, scoliosis is the result of an illness, birth defect, such as cerebral palsy, or a malformation of part of the spine during pregnancy, known as congenital scoliosis.

Dr. Siambanes notes that some curves of the spine are mild and do not require immediate treatment. A minor curve should be monitored through periodic examinations and X-rays to ensure it does not increase. If a curve is fairly large, 20-40 degrees, and a child is still growing, a brace is often recommended to keep the curve from getting worse.

If the curve progresses further, surgery may be recommended. Surgery becomes a necessity in extreme cases of scoliosis when the rib cage puts pressure on the lungs, heart and other internal organs, making it more difficult to breathe and harder for the heart to pump.

“Scoliosis surgery is one of the most extensive and complex orthopedic surgical procedures performed on children,” says Dr. Siambanes. “However, recent advances in surgical technology and high-tech monitoring equipment have improved the success and safety of these surgical procedures and even eliminated the need for braces after surgery.”

Elicia spent five days in the hospital after her surgery, and was able to return to moderate activity within two weeks. During a recent follow-up appointment, she could not contain her smile.

“I tell everyone I know how amazing I think Dr. Siambanes is. I can only imagine how much pain I would be in today if he hadn’t fixed my back. I really do feel like he gave me my life back.”

For more information about scoliosis and treatment options, please visit www.stjosephschildren.com or call 813-443-2046.