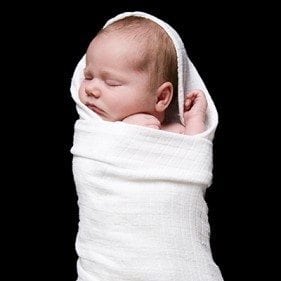 Sudden Infant Death Syndrome (SIDS) is the leading cause of death in the United States for babies between infancy and 1 year.

Each year, over 2000 infants die from SIDS, according to the National Institute of Child Health and Human Development (NICHHD). While the exact cause of SIDS is not known, unsafe sleep environments can cause an increased risk in SIDS.

A safe sleep environment, one free of items that could potentially crush or suffocate the baby, is simple to create.

“The safest place for an infant to sleep is on her back, on a hard mattress, in a crib with nothing else in it,” says Kelley Parris, director of the Children’s Board of Hillsborough County.

Infants should sleep without blankets or pillows in the bed, and crib bumpers should be avoided. Babies should sleep in a onesie or one-piece pajama to increase their safety as well, Parris says.

One of the hot-button issues for new parents is bed-sharing. Some parents advocate it while others abhor it. Almost 70 percent of the deaths occurred in babies who were sharing a bed at the time of their death, according to an article from BayCare. The babies who died before 4 months of age were most likely to have been sharing a bed, according to BayCare.

“From 2011 to today, sleep was responsible for 50 deaths [in Hillsborough County], and when we look at Pinellas County, it is at 41. So were talking about 91 children since 2011 that have perished in a preventable situation,” Parris says. “These are all instances where we need to take precautions and do the safest thing to keep our babies safe.”

If bonding with your child is a concern, consider pulling a Pack-N-Play or bassinette next to your bed or keeping it close to where you sleep, Parris advises. She says this will give parents the peace of mind of being near their baby while allowing the baby to sleep on her back without potential suffocation hazards. It also will make it easier to nurse, but baby should be put back into the crib or bassinette when nursing is done.

“Taking into consideration that there are some cultural issues when it comes to bed-sharing, the numbers are what they are and they speak for themselves,” Parris says.

If bed-sharing is something that you would like to experience with your child, Parris says there needs to be an element of independence for the child. The child should be able to roll over on his own and should be able to get up onto his knees by himself.

According to the NICHHD, a popular myth is that if you are in the bed with your infant you will be able to hear and prevent something from happening. However, for many parents – especially new ones- exhaustion can impair your ability to wake and hear something. Another problem with this myth is that often when a baby suffocates there is no sound at all.

It is also unsafe to sleep with an infant on a couch, sofa, waterbed or armchair, according to the NICHHD. Babies younger than 1 should also not be allowed to sleep in a bed with other children.

When it comes to the safety of your baby, it is important to make sure to take every precaution to lower the risk of SIDS. Keeping your baby in a safe sleeping environment can save her life.

“We just have all got to be proactive,” Parris says.