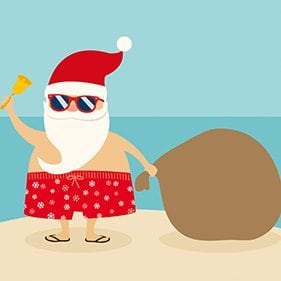 It’s 90 degrees outside. Kids are out of school, and getting into “festive” holiday clothes may simply entail a change of flip flops. But as crazy as it sounds, it’s time to get ready for Christmas. That’s right: It’s Christmas in July!

ABC Action News is partnering with Salvation Army units in Hillsborough, Pinellas, Polk, Pasco and Manatee to bring Christmas to more than 17,000 kids this December. And we need your help.

Relax! There’s no shopping mall or parking lots involved. All it takes is a promise to consider adopting at least 10 angels from your local Salvation Army’s Angel Tree program.

“I think one parent said it best when she said: ‘I am so grateful because if my daughter wasn’t in this program, she would not have Christmas this year,’” explains Major Connie Morris in Lakeland. “The need is so great that we have had parents who’ve taken the bus and walked over a mile to pick up their children’s gifts.”

Each November and December, Salvation Army units struggle to provide a gift to children on their Angel Tree list. In 2015, approximately 6,000 kids will depend on Angel Tree in Hillsborough County alone. In Pinellas, it’s closer to 5,000 children, followed by 3,900 children in the greater Lakeland area, 2,000 in Bradenton/Manatee and another 300 kids in Pasco County. Angel tree would not survive without the local businesses, civic groups, church groups and schools that agree to shop for a certain number of children in December. How many or how few depends on each group. There’s no magic number, but most Salvation Army units agree 10 angels is a good place to start. ABC Action News employees and viewers have adopted between 350 and 500 “angels” each year. But that number is not the norm and certainly not the minimum requirement when it comes to making a difference.

“We understand this will not alleviate all their struggles, but we hope this small token of love will bring a smile to their face during the holiday season,” explain Majors James and Leisa Hall in Tampa. “Approximately 6,000 children and more than 30,000 gifts were distributed to impoverished families last year. We greatly depend on your generosity in the community to make sure we can continue.”

Here’s how it works. When a group of people promises to adopt a certain number of angels, their local Salvation Army unit can continue its search for sponsors to take care of the rest of the kids on the list. Way before Thanksgiving, each unit has a realistic number of how many kids they can help, based on the number of angel tree sponsors. In November, Salvation Army volunteers will deliver the paper angels to your group. A child’s first name and age is written on each paper angel, along with one basic item he or she needs and a toy they’re hoping for. In some cases, the paper angel lists more than one gift to give the shopper more options.

“Seeing the community pull together to provide toys and clothing for children that they may never meet is really special,” says Lindsay Crossland at the Salvation Army Unit in Clearwater. “To me, the Angel Tree Program embodies the spirit of Christmas.”

Book clubs, church groups, Girl Scout and Boy Scout troops and even employees looking for a holiday project or team building exercise often get involved. It’s that kind of participation that has kept the program alive since 1979. That first year of the program’s founding in Lynchburg, Virginia, Angel Tree helped 462 children. Thirty-five years later, the program brings Christmas to nearly a million kids nationwide.

This summer, Salvation Army units in five Bay Area counties need more groups to sponsor Angels. In Clearwater, for example, they have secured sponsors to cover only half of the angels this Christmas. They’re hoping for another 15 groups, at the least, to sponsor angels. In the Greater Tampa area, Angel Tree needs another five to seven groups, if each group can adopt 100 angels.

The St. Petersburg area is facing the most acute shortage of sponsor groups. Each year, only a third of its angels are adopted by individuals at partnering shopping malls. The rest come from sponsor groups like church groups and civic organizations. The need to recruit another 40 local businesses, corporations, and groups from the community is weighing heavily on the St Petersburg unit leaders’ minds. Bradenton had 69 groups sponsor 1,586 angels last December, but this summer they’re adding another 400 angels to the waiting list.

On July 13th, we launch “Christmas in July” on your ABC Action News Station! Tune in on Wednesday, July 15 – our SUPER RECRUITMENT DAY – with Salvation Army captains, majors and volunteers from five counties coming to our TV studios to help. Details will be posted on www.abcactionnews.com/angeltree and new sponsors will be among the guests selected for Positively Tampa Bay, ABC Action News “Christmas in July” campaign coverage and during our traditional “Angel Tree” coverage in December.

Why are we doing this? Because the Salvation Army Angel Tree program has been a tradition for our news family for more than 15 years! The veterans in the building can’t remember a December without Angel Tree.

“We don’t even own tree decorations!” laughs Peggy Philmore, front desk receptionist at ABC Action News. “The Salvation Army brings us new angels every year and that’s all we need.”

Philmore hangs the angels on the lobby tree in November and has a front row seat as they come off the tree into the hands of adopting viewers and co-workers. However, she’s also the one to feel the stress of seeing an angel still hanging on the tree, because she knows that it represents a child for whom this program is the only option for toys. Today’s computerized lists ensure charities are serving children not registered for other toy drives. Once a family places a child’s name on the Salvation Army Angel Tree list, their name can’t be entered in others toy drives. That boy or girl is at the mercy of angel tree sponsors.

So join us. Talk to your family, friends and co-workers about adopting angels from your local Salvation Army Angel Tree program.

“We are so blessed, it’s hard to imagine being in need,” says Captain Ken Fagan. “But that is the reality for many children in Pasco County at Christmas. Without the help and support of the businesses, organizations and civic groups who adopt Angels from The Salvation Army Angel Tree, these children wouldn’t experience the joy of Christmas.”

Lissette Campos is director of community affairs for WFTS TV ABC Action News and the proud daughter of Salvation Army program recipients in 1961.