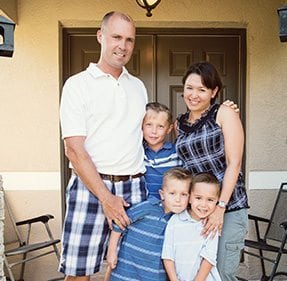 From jail to Boys Town to Cornell to the Air Force to the Reserves to the Hilton to stay-at-home dad: Christopher Martin has had an interesting journey. Growing up, he moved a lot and his mom struggled financially. “I remember living in six different places before sixth grade.” As a teen, he ended up in juvenile detention. “It was a significant event in my life and how I raise my boys now. I spent five months and three weeks at the Boys’ State Penitentiary in Eldora, Iowa. I turned 14 years old amongst some kids who did the same stupid stuff I did and many other kids who did stuff that I won’t let my boys read about. It took me about three weeks there to realize I might not fit it back home, but I definitely don’t fit in here. It was a scary, eye-opening experience.”

After his juvenile detention stay, Martin went to Boys Town, which would change the trajectory of his life. He qualified for a never-before-used scholarship to Cornell University in upstate New York for students from Boys Town. He spent 4½ years at Cornell, earning a degree in political science, then he took a commission as a second lieutenant in the Air Force. Here and there his duties took him, and he eventually landed at the Defense Equal Opportunity School at Patrick AFB, FL.

What’s the most rewarding part of being a dad?

It’s looking at these innocent children, watching them grow and having them know you so well but still think you’re a superhero. Or when they risk the ire of “go to sleep or stop goofing around” for just one more kiss.

What is your favorite thing to do with your kids?

I like taking them swimming and on bike rides. I like reading to them and watching superhero movies. And despite the wife’s better judgment, I also like taking care of animals with them. We have Beowulf, a black lab, two cats, a couple of pigs (guinea size) and a bazillion ducks in the back yard. For the record, I’m not a farmer.  Do not believe my wife.

What is the most challenging part of fatherhood?

Not laughing at the boys when they’re doing something wrong but it’s really funny. Seriously, we all have good and bad qualities. I told myself that I would never raise kids like my mother did. She’s kind of my anti-role model. “Do as I say not as I do.”  That was her lesson on smoking, drinking and most everything else. Bottom line, time is not the challenge for me. It’s communicating with them as a friend but still maintaining that role as father. Too far one way or the other and I feel you can really mess up the relationship.

As a father, how do you view your responsibilities?

I think back to one of my many faux-pas in my pre-father days when I asked a stay-at-home-mom, “Do you have a job?” She responded, “I have three kids.” I responded, “No, but what I meant was do you work?” She wasn’t very talkative the rest of the evening. Now I understand. My responsibilities are unending. But I’d have it no other way.

What advice would you give other fathers?

A minister was talking about what is important to a child and he said, “You can’t just take your kid to Disney World for a few days and then be gone the rest of the week. That is not quality time. Quality time is changing diapers, putting bandages on skinned knees, making dinner, having dinner as a family, checking homework, going on walks, singing songs, grounding them when they’re bad, etc. Quality time is quantity time.”  Just spend time with your kids.

My boys laughing. My wife painting and gardening. Throwing the ball with my dog. The underdog winning in the movie. A good beer, a good steak and 72 degree weather. Seeing my kids run to their mommy when she walks through the door. I like how they think they’re going to grow up and marry her. Hearing my kids read, watching them dance and making them laugh (which usually involves me getting hurt, so I actually don’t like that at the same time).