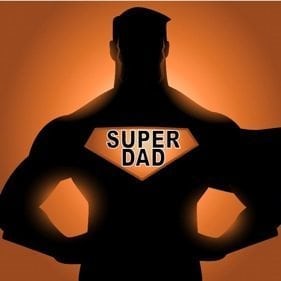 Let’s be honest. Dads often get the short end of the appreciation stick. When a singer wins a Grammy, an athlete wins a championship or an actor wins an Emmy, you can just about bet on them thanking mom first. And then maybe dad will get some love too. We here at Tampa Bay Parenting want to make sure that dad gets his recognition. That’s why we’re once again featuring area dads making a difference at home and in the community. Dads are super and we’re shouting it!

The fact that Kevin Plummer grew up to be an educator should come as no surprise. It’s practically the family business for Tampa Preparatory ‘s head of school. His mom was a professor at Colorado University and his dad was a long-serving principal for Denver Public Schools.  He has two sisters, one who works in text book publishing and one who is the director of admission for St. John’s School in Houston, Texas.  His wife Jennifer was a teacher for many years. Daughter Galen should take note (seriously, she needs to study hard to follow in her family’s footsteps). Click here to read more.

James McIlwain, DD, had tunnel vision. He wanted to become a dentist and specialize in pediatrics. Fast forward 35 years and the Air Force veteran, husband (52 years and counting) and father is in practice with his daughter, also a pediatric dentist. And his son works in the office, too. The practice has grown since the first day when there were just seven patients. The office is family-oriented, with a nephew, son-in-law and an Emory dental classmate of Dr. McIlwain working together, treating patients like family. The original office expanded. Next a second office was added. Click here to read more.

Keith Willett met his wife in the perfect place for a native Floridian —the beach. The moment they saw each other they knew they were meant for one another and they were married a year later. Soon after, came two boys who are now 11 and 8. Now his days are filled with work as a financial advisor, lacrosse on Saturdays and occasional date nights with wife Tricia. Click here to read more.

Married nearly 15 years, John Scheinman and his wife Allison moved to the Tampa Bay area in 2001 to escape the cold Northeast winters. Soon after, they welcomed their now 8-year-old twin girls, Hailey and Olivia (Livy). “Life may have been easier if Livy was born without special needs, but we have learned that the hard is what makes it great,” he says. Livy was born with cerebral palsy and epilepsy, is nonverbal and cannot walk or sit up. The proud father says, “She has changed our lives in so many ways and has made us reevaluate what is important in life.” The family started Livy’s Hope with a mission to give gifts of inspiration to children with medical needs and their families, provide community education and raise money for epilepsy research.  Click here to read more.

Born in Gainesville, Antonio J. Gayoso, MD, is the son of Cuban immigrants. He is board certified by the American Board of Plastic Surgery and is an active member of The American Society of Plastic Surgeons and The American Society for Aesthetic Plastic Surgery. He is the chief of plastic surgery at St. Anthony’s Hospital and Bayfront Medical Center. Dr. Gayoso established his plastic surgery practice in St. Petersburg in 1998 and strives to give back to the community. He has participated in Faith in Practice, an international goodwill mission, providing plastic and reconstructive surgical care in Guatemala.  Click here to read more.

Originally from the New England area, Geoff Vandal moved to Temple Terrace when he was 2. He graduated from King High and USF, married wife Mindy and moved to Atlanta for work, where his children Tyson and Victoria were born. In 2008, the family moved back to Tampa to be closer to family and are happy to be home. Click here to read more.

Born in Dunedin and raised in New Port Richey, Mike Lewis met wife Jenn in high school, marrying her four years after their graduation. They now have two beautiful girls, Gracyn Kenzie, 2, and Lola Eloise, 4 months. They were born the same day two years apart! A nurse, Lewis is working toward becoming a physical therapist. Click here to read more.