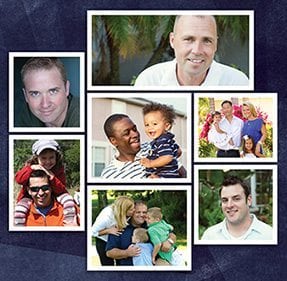 Let’s be honest. Dads often get the short end of the appreciation stick. When a singer wins a Grammy, an athlete wins a championship or an actor wins an Emmy, you can just about bet on them thanking mom first. And then maybe dad will get some love too. We here at Tampa Bay Parenting want to make sure that dad gets his recognition. That’s why we’re once again featuring area dads making a difference at home and in the community. Dads are super and we’re shouting it!

Home is where the heart is and even though his children’s acting careers take them and his wife to LA often, the bay area has been home for Chadd Thomas for 24 years. And he’s made a name for himself in the community. Thomas and his wife Kristi are local celebrities as hosts of the Magic Morning Show on Magic 94-9 FM. The couple has been working and spending 24 hours a day together for 12 years. And kids Brendan, 13, and Emeline, 7, having spent their fair share of time on the morning show throughout the years, no doubt got the performance bug from mom and dad. So how do they do it all? Read on.

From jail to Boys Town to Cornell to the Air Force to the Reserves to the Hilton to stay-at-home dad: Christopher Martin has had an interesting journey. Growing up, he moved a lot and his mom struggled financially. “I remember living in six different places before sixth grade.” As a teen, he ended up in juvenile detention. “It was a significant event in my life and how I raise my boys now. I spent five months and three weeks at the Boys’ State Penitentiary in Eldora, Iowa. I turned 14 years old amongst some kids who did the same stupid stuff I did and many other kids who did stuff that I won’t let my boys read about. It took me about three weeks there to realize I might not fit it back home, but I definitely don’t fit in here. It was a scary, eye-opening experience.”

After his juvenile detention stay, Martin went to Boys Town, which would change the trajectory of his life. He qualified for a never-before-used scholarship to Cornell University in upstate New York for students from Boys Town. He spent 4½ years at Cornell, earning a degree in political science, then he took a commission as a second lieutenant in the Air Force. Here and there his duties took him, and he eventually landed at the Defense Equal Opportunity School at Patrick AFB, FL.

Growing up with two older brothers and a younger sister was fun, and Nathan Cowan wants his son to know the joy of having siblings. “It’s important to me,” says the Venice native. For now, Cowan and his wife are enjoying their time with son Patrick. Like dad, he’s a sports fan and even has some moves. Read on.

New Jersey native Dan Gulick joined the Air Force and moved around, until arriving in Tampa in 2002. While in the Air Force, he was a firefighter, deploying overseas twice and traveling to numerous countries from Egypt to Iraq to Afghanistan. Gulick is now in his fifth year with St. Petersburg Fire Rescue. And a big part of his job is making sure other people get to enjoy another day of their lives with their families. That is why he cherishes each day he has with wife Megan, daughter Kiersten, 4, and son Jack, 8 months. Read on.

Joseph Baraket has been working in the social services field for 15 years and now works for the Guardian ad Litem program in Pasco County. It’s definitely an emotionally taxing job, but he says it’s rewarding to make a difference in children’s lives. At the same time, the job has helped him be an effective parent to Joshua, 6, and Aiden, 3. “At the end of the day I am happy I have them and happy they have me.” Baraket, his wife Jessica and their two boys have lived in the Tampa Bay area for two years and love it. Read on.

As a pediatric cardiovascular and thoracic surgeon, Paul Chai, MD, spends his days at St. Joseph’s Children’s Hospital operating on kids born with congenital heart defects. As you can imagine, Dr. Chai’s job is both rewarding and stressful. To decompress, he enjoys spending time with his family, watching the Rays play and fishing in the flats of Tampa Bay. He’s been married for six years to wife Suzanne, and the couple has welcomed two children, 6-year-old Natalie and 1-year-old Elena. Read on.

Pasco County native and University of Florida graduate Marcus Meyer launched Gator Cleaning Solutions nine years ago and hasn’t looked back. His growing company, which offers commercial cleaning strategies to business across the bay area, employs nearly 100. Yet, he’s still most proud of his wife and best friend Erin and their two children ages 9 and 6. Read on.