Taking Action for Yourself 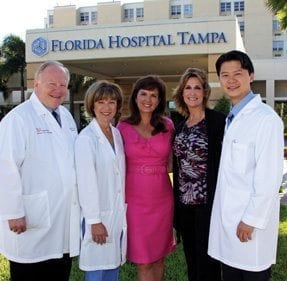 “You have breast cancer.”

Those words brought me to my knees in September of 2011 and sent me spiraling into a fog of tears and anxiety and fear like I’d only experienced once before. Breast cancer killed my mother. I watched it defeat her slowly. Now that same dreaded disease called on me. I gave myself one week to mourn my life without cancer, and when the tears had dried, I could think again, I kicked into reporter mode and started assembling a team of medical experts who could not only get rid of my cancer but help me heal and still look and feel good.

Finding the right team is so crucial and many women, I fear, just take one doctor’s word and blindly follow whatever treatment is initially recommended. I did not. I watched my mother do what she was told and not question any medical authority and in the end she died anyway so I was determined to do it differently.

Dr. Mary Gardner, a radiologist at Florida Hospital, found my cancer, just some simple calcifications clustered together, more though than six months prior. She recommended a biopsy. I wanted a second opinion. Not that I didn’t trust her, but I always tell women, when the stakes are high, make sure you hear more than one voice.

So I had another doctor perform the biopsy. Dr. Sylvia Campbell had been a friend for years and a gentle soul. If anyone had to tell me I definitely had breast cancer, I wanted it to be her. Lesson here, you have choices. Don’t be afraid to exercise them.

After the cancer was confirmed. I had another decision to make. Who would do my surgery? I interviewed a number of surgeons but something wasn’t sitting well with me. The before and after pictures I saw left me wondering if this was the best modern medicine could offer women. So many women looked, well frankly, butchered.

That’s when breast cancer survivor Shelby Coriaty came in. She ran support groups at Florida Hospital and reached out by phone to see how I was doing and if I could use any words of advice. I told her how I wasn’t really sold on any doctor or any procedure yet and I was feeling quite sick about it.

She told me about Dr. Charles Cox, formerly of Moffitt Cancer Center, now with USF and Florida Hospital. She described a skin and nipple sparring double mastectomy he’d been doing for a while. I went home that night and got online finding the PowerPoint presentation Dr. Cox showed to new patients. He was aggressive in getting rid of the cancer, checking for its spread, but he was also very conscious of the cosmetic outcome. The pictures I saw made me stand up and yell, “That’s it! Exactly what I have been looking for.” I made an appointment the next day.

I clicked with Dr. Cox immediately, probably because he wasn’t afraid of my reporter toughness and my parade of continuous questions. He answered everything.  When he introduced me to plastic surgeon Dr. Wayne Lee and said the two would be in the OR together, doing both the breast cancer surgery and initial reconstruction as a team, now that made sense to me. I’d get a better outcome, I reasoned, if the two doctors worked together. That sealed the deal.

Now, I’m not trying to sell you on any hospital or any doctor. What I’m trying to share is that each of us has a journey and we must find our own way.  The only way you can do that is to ask questions — lots of them. Yes, you must listen to the advice of your medical experts but then do your own research. Talk to other breast cancer survivors and interview doctors – a number of them. You are putting your life in their hands. Don’t be intimidated by someone who says this is just the way it’s done. If that’s not what you feel comfortable with, keep looking. And if you’re not quite happy with the results, ask your doctor to work with you until you are satisfied.

It’s been almost a year since my initial diagnosis. Three surgeries later, I feel good and viewers tell me I look good as well. And I owe this sense of peace and happiness to the medical friends who held my hand through this journey — from the doctor who found the cancer to the doctor who confirmed it to the men who took the cancer out and put me back together again. Don’t be afraid to take action for yourself. Picking a winning team is half the battle.

For more on my journey, visit my website www.takingactionagainstbreastcancer.com.

Linda Hurtado is the 5pm anchor and medical reporter for ABC Action News. A 12-time Emmy Award-winning reporter, she met her husband while on assignment in Cuba. When not interviewing local newsmakers, you’ll find her at one of her kids sporting events.