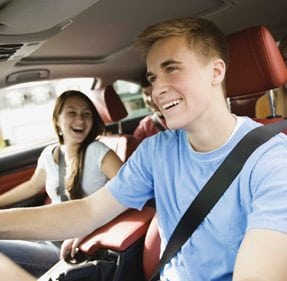 If your teen is counting down the days until he’s able to legally drive (if he’s not behind the wheel already), you’re not alone. But before you hand over the keys, it’s important to remember that driving is a high-risk activity, especially for young, inexperienced drivers. In fact, motor vehicle crashes are the leading cause of death for U.S. teens. On average, eight teens die every day from motor vehicle injuries.

How big is the problem? According to the National Highway Traffic Safety Administration, about 3,000 U.S. teens between ages 15-19 are killed annually and more than 350,000 are treated in emergency rooms for injuries suffered in motor-vehicle crashes.

“All new drivers, even straight-A students and good kids have a higher chance of being involved in a fatal crash than experienced drivers,” says St. Joseph’s Children’s Advocate Tamyne Maxson. “Per miles driven, drivers ages 16 to 19 are four times more likely than older drivers to crash.”

Maxson adds that teenagers tend to make risky decisions and often overestimate their abilities. Among teen drivers, those at especially high risk for motor vehicle crashes are:

The good news is that most teen motor vehicle crashes are preventable and proven strategies can improve the safety of young drivers on the road.

Research shows that parents play an important role in increasing their teen’s driving skills as they have the have the greatest influence over their teen’s behavior.

“Talking with your teen about the importance of being responsible while driving is the first step to keeping them safe,” says Maxson. “It’s also a good idea to remind your teen that driving is a privilege, not a right.”

For more information on how to keep your kids safe and healthy on the road and at home, visit Facebook.com/StJosephsChildrens.