Tales of the Heart – Curtis Family 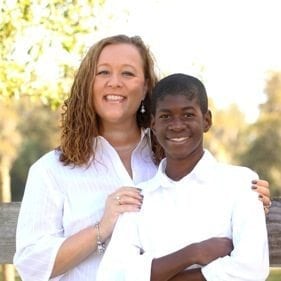 I was blessed that God chose two amazing parents for me – Jeff and Eloise Curtis. My parents were 15 when they met and 16 when they got married and had me. They were married 35 years when I lost my mom. Such an amazing example of what unconditional love truly looks like. I’m the oldest granddaughter of over 30 grandkids. I taught many of my cousins how to swim, took them roller skating, and was always the babysitter in the family. Family was never something I took for granted. I was told when I was in my late 20s I’d never be able to have children but still tried in vain. I knew that adoption would be my best option to be a mom.

On April 14, I attended an event sponsored by the Junior League of Tampa – it was a match event, where children ready to be adopted had the chance to meet prospective adoptive parents. It was set up as an outdoor carnival. The children rotated one way while the adults rotated the other. When it was my turn to rotate to the petting farm, I held the gate open for a little guy behind me, who vehemently said, “No thank you.”

It broke my heart a little to think that he was afraid of the farm animals, so after a few minutes, I saw him leaning on the outside of the gate. I approached him with a really soft rabbit and asked him if he’d like to pet it. It was a really great moment with this boy; then the buzzer rang for everyone to rotate. He left without me getting his name.

A little while later, I found my Family Adoption Specialist Shannon and asked her if the boy she was telling me about earlier in the week was there. It was at that moment that my whole world stood still. She turned around and said, “Ronderik, I have someone I’d like for you to meet.” It was my bunny boy! From that moment on I stayed very close to him. We played laser tag, danced, made some crafts and had lunch together. His case manager and several other folks who knew him sat down and spoke with me about his background. Prior to attending the event – I asked God to let me know if and when I found my little one – and there was no question in my mind that it was my bunny boy. I don’t want to embarrass him, but this is exactly how it happened and I think it’s an awesome story.

On May 3, at exactly 12:51 p.m., I got the call that I’d officially been matched with Ronderik. On May 23, I finally got to see him again for the first time since the event. We met at the mall with his case manager. We talked about what he was doing in school and had some lunch and frozen yogurt. He thought it was pretty cool that we both wore red, black and white and matched perfectly. After that meeting, we met for the next month under supervised visits. On June 20, my 40th birthday, I received the best present when I was told we were approved for unsupervised visits. We had a dinner and movie date and he bought me a beautiful plastic tiara with a 40 on it. We continued to visit and add in overnights, with him moving into our home on Aug. 3. He is doing great in school and has made some great new friends. He plays the trombone in the school band and is also taking piano lessons. On his 15th birthday, Nov. 27, we finalized the adoption – with an amazing packed courthouse — and followed it with an Elvis-themed birthday/finalization day party in the ballroom of the Temple Terrace Golf & Country Club.

My son has changed my life in ways I never imagined. He is absolutely the light of my life. He is the first thing I think of when I wake up in the morning, and the last thing I think about when I’m going to sleep. Becoming a parent has made me look at life through my son’s eyes. He has taught me how to be happy. RD’s light shines so brightly and everyone who meets him instantly falls in love. Knowing that I have the opportunity to change his life, just as he’s changed mine, is the best gift God could ever bestow upon me.

Ronderik lived the first 14½ years of his life in the system. I am his 13th and final home.

There are so many amazing hotels and resorts along the beaches in Tampa Bay, but there is one that is quite literally the perfect...
Read more
Education