Tales of the Heart – Father and Son 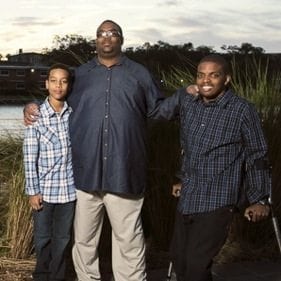 I always thought I would have children of my own and live a “normal” life. Little did I know. When I married my wife, she had three children. I decided that I could never take their father’s place, but I could be the best dad that I knew.

After my wife and I had been married for a few years, we were approached by a friend who knew Jalen and thought that I would be a good mentor for him as he and I both have cerebral palsy. We were encouraged to watch the Wednesday’s Child segment on a local news station. After watching, my wife and I both knew that Jalen would one day come to live with us.

He would come to our home during school breaks and spend time with us. Eventually he came to live with us. In hindsight, I realize that I did not prepare my boys for the transition we were all getting ready to experience.

In the beginning it was difficult. I knew to a certain degree Jalen was somewhat afraid to live with us. Knowing this, I tried to tread as lightly as possible even though I believe in order and structure. As a father, I had to ask myself, “How do you deal with a young man who clearly has emotional wounds from a past that he did not choose? How do you teach that young man skills that will help him to be successful in the real world? How do you make him feel accepted in the family? How do you not lose your other children in the process?” The biggest question was how in the world can I get him to come out of his room for anything other than food and to go to the bathroom?

After several months, we seemed to gain fluidity to operating as a family. Not free from the hiccups that life can bring but able to deal with them as they come. It was summer of 2011 when we finished the adoption process. Jalen is in his second semester of college and his future is brighter than ever. I would say to adoptive parents out there that you are not alone. I am a living testimony that adoption is not easy but it is well worth it in the long run.

My adoption experience began three years ago when I did a taping for the segment Wednesday’s Child, which documents children in foster care looking to be adopted which was posted on a website.

My now adoptive family attended the same church and my case manager knew that I had been looking for a mentor because I was struggling with everyday life and in need of a lot of help with basic things.

So I began going to visit on a frequent basis. I would visit during my school breaks and that soon turned into weeks at a time. Following my freshman year of high school, I was given the opportunity to move in with my family and I declined simply out of the fear of change.

In summer 2010 after my sophomore year, I moved in with them and that was a tremendous adjustment, coming from a situation where I was pretty much allowed to do what I wanted to do into a structured situation. While there were some rough spots in the beginning, I consider it one of the best decisions of my entire life. I have been shown nothing but love, care and motivation, which has propelled me to new broader horizons. My parents pushed me to get the absolute best out of me. I did not always agree with the way it was done, but it really helped me in the end.

On June 20, 2011, my adoption was finally complete. It was a long, tedious process and many people worked tirelessly on my behalf to make sure my transition was as smooth and easy as possible. It taught me a tremendous amount of patience and to have faith and believe that there is always someone who will see the absolute best in me no matter what. Just the fact that people were willing to go through so much to ensure my well-being means so much.