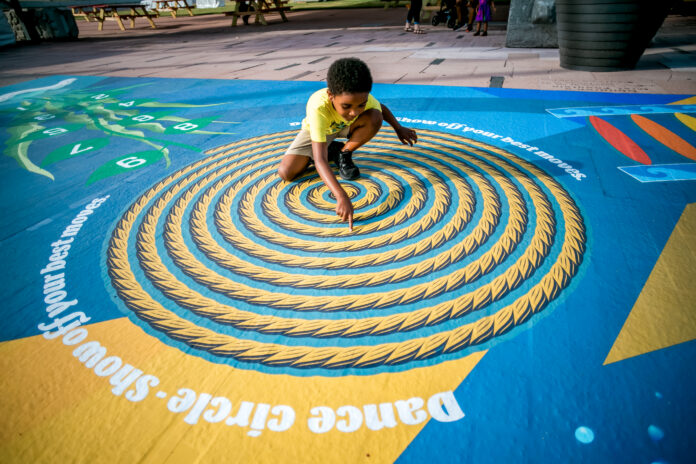 The next time you’re taking walk or bike ride along Tampa’s Riverwalk, be sure to make a stop at Curtis Hixon Waterfront Park to check out the super cool ground mural designed just for kids!

It’s part of the Tampa Downtown Partnership Summer Series that brings really cool enrichment activities to parks around the city and this year is focused on the new world of social distancing that has taken over our lives.

You can seek some shade under the 10,000 square foot Tampa Bay Buccaneers Foundation tent where picnic tables have been spaced apart and even coated in an antimicrobial surface to help keep families safe.

But, the coolest part of this year’s Summer Series is that ground mural we first mentioned!

The theme celebrates Port Tampa Bay featuring colorfully designed games like hop scotch, mazes, and mirror games. The mural is also coated with the same anti-microbial surface as the picnic tables called Safe Shield. This was courtesy of OAI Visual Branding, so a big THANK YOU to them!

If you get hungry, Whatever Pops has their storefront open serving those delicious handcrafted ice pops we all love, drinks, snacks, and even grilled cheese sandwiches.

The Summer Series will run through the summer break until school resumes in August. It is open from dusk til dawn.

About the Effort: This year the Tampa Downtown Partnership has teamed with the City of Tampa, Port Tampa Bay, and OAI to present its Summer Series while the Tampa Bay Buccaneers Foundation has again provided the giant tent.

We hope everyone is having a great new school year! With the weeks being filled back up with schoolwork, we know that the weekends...
Read more
Family Fun

Enchant Christmas, the 'World's Most Magical Christmas Experience', announced it is returning to Tampa Bay on November 25, 2022 with its millions of twinkling lights, a holiday...
Read more
Fall Family Fun