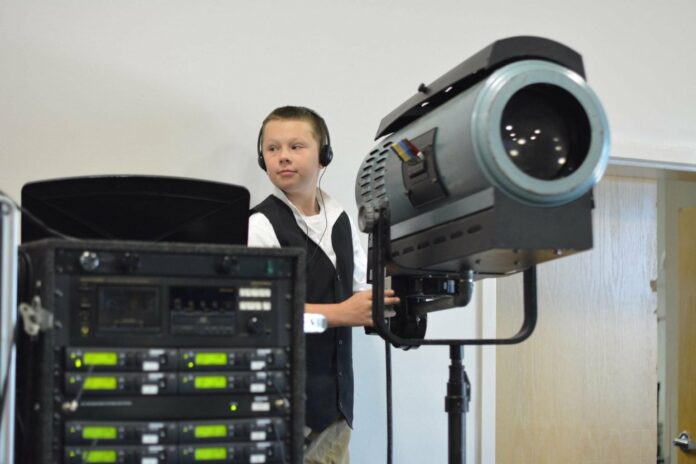 When the spotlight hits the stage, all eyes are on the actors. But it takes a team to control the lights, operate the sound board, design the costumes, build the scenery and manage the backstage — all so the actors can focus on telling the story.

Today, school leaders are finding that students as young as elementary school are able to assume these responsibilities. By engaging kids “behind the scenes” in nontraditional STEM activities, teachers are inspiring more students in the practical application of science, technology, engineering and math. And in today’s fast-paced technical world, these skills prepare them for future careers.

Drama teacher Seth Travaglino emphasizes the importance of off-stage skills to all his students, even the ones who love the limelight. Far more opportunities are available backstage than onstage, Travaglino tells them, so if they choose to pursue theatre professionally, actors with multiple skills stand a better chance at getting hired than those who only can serve in one capacity.

Isabela Mocsari, an eighth grader at Corbett Prep, initially joined her school’s performance groups to act, but in fifth grade, decided to try her hand at stage managing. She loved wearing the headset, calling cues backstage and communicating with the actors on behalf of the director. It has turned into her specialty, and she even won a state “All-Star Tech” award earlier this year at the Florida Junior Thespian Festival.

Isabela is hoping for a career in fashion design — possibly designing costumes on Broadway. But the skills she is honing through technical theatre would serve her well in any job. It takes strong organizational skills and time management to work backstage, she says. She takes notes on changes the director wants to make and sees them through, and she has to keep track of how much time the cast has before the show starts and what needs to be done. Does everyone have costumes? Are props set in place? Who needs their makeup and hair finished?

“If you want to be in theatre, but you’re shy, you can be in tech,” Isabela says. “You can be part of the group.”

Students begin performing at Corbett Prep as young as PreK3 in class productions and have the option to join larger-scale shows starting in fourth grade. To involve those who choose to stay off stage, the school created a technical theatre elective for fifth graders. The students learn how theatre lights and sound work and how to prepare the stage for the sets. Directors choose a tech crew for different performances, giving them responsibilities during rehearsals and shows. The students are so eager to take on the different tasks, Travaglino says, they are always asking for new jobs.

Technical theatre appeals to many students who are kinesthetic or tactile learners and learn by doing. A show may require set pieces built to certain specifications, such as mobile platforms big enough to hold several cast members but light enough for students to move between scenes. It turns into an engineering problem for students to solve.

In Corbett Prep’s new set construction class, for example, STEM teacher John Palmer challenged students to build a small bridge for an upcoming dance recital. The middle school class had to figure out how to bend wood to form an arch, and keep it curved, as well as how to make the bridge both aesthetically pleasing and sturdy enough to support dancers. They tried one model, tested it, discovered problems and went back to the drawing board to try again. After several attempts, they found a solution and successfully completed the bridge.

The students had to learn to work together on the planning and construction, because all were accountable for its success or failure. In the end, they had the satisfaction of creating something needed and useful.

Palmer welcomed the trial and error during the process: “When things turn out other than the way we expect, we learn.”

While technical theatre can provide an entry point into the world of theatre for students who are reluctant to take the stage, involvement also builds a sense of confidence and community. And when the curtain closes, cast and crew has formed a tight bond.

Courtney Cairns Pastor is the communications coordinator for Corbett Prep, a PreK3-8th grade.

July 4th is fast approaching, and that means it's time to figure out how and where to celebrate. This year, there are a number...
Read more
Education