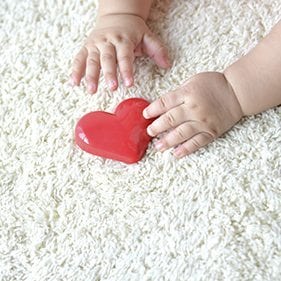 Rebecca McKinney’s pregnancy was going wonderfully. The expectant mother felt energetic and had no morning sickness, so when she showed up at a routine well baby appointment at St. Joseph’s Women’s Hospital, she had no warning about what was about to unfold as an ultrasound technician began an exam.

“Suddenly, the technician abruptly excused herself saying, ‘I need to get the doctor to take a look at something here,’” McKinney recalls. “My heart sank in that moment.”

When the technician returned, she had a radiologist with her, and the two informed the parents that they had noticed a defect in the baby’s heart and that a pediatric cardiologist was awaiting their arrival across the street at St. Joseph’s Children’s Hospital. Upon arrival, they were told that their baby had a congenital heart defect: pulmonary atresia with intact ventricular septum.

That day, they left the office in shock. Today, thanks to interventions that can sound to the untrained ear like something out of the future, tall, blonde Raelyn Zaruba is a healthy, thriving, active child who loves music and the arts. Had this situation occurred 25 years ago, there could have been a different ending to the story. The strides that pediatric and fetal cardiology have made, however, ensured a happier outcome.

“It really is the stuff of science fiction,” says Dr. J. Blaine John about the fetal cardiac intervention he and a team of doctors performed on Raelyn before she was born. “We don’t deliver the baby; we don’t do surgery… mom ends up with a little Band-Aid on the belly.”

John is a pediatric and fetal cardiologist at St. Joseph’s Children’s Hospital, which has one of the largest pediatric cardiovascular programs in the Southeast, and is a regional referral center for the diagnosis and treatment of congenital heart defects. He sees dozens of babies weekly before they are even born to diagnose fetal cardiac problems and figure out how to fix or at least ameliorate them before birth and possible subsequent heart surgery.

John explains that before the days of fetal echocardiograms—heart ultrasounds—there was no way to tell whether there were problems with babies until they were born. Babies with heart conditions were born in extreme danger, unable to oxygenate their blood without medical intervention. They were often called “blue babies.”

“Now we know before they are born,” explains John. “We can not only arrange for the proper treatment, we can even start therapy before birth.”

John says that a baby is most commonly diagnosed with three possible cardiac conditions in utero: an abnormal fetal heart rhythm, a fetal heart function problem or most commonly a structured heart problem, like a hole in the heart or a defective heart valve.

If an abnormal fetal heart rhythm is detected in an infant, John can prescribe medications to the mother to help stabilize the heart, and even deliver medication directly to the baby by injecting them through the umbilical cord.

If the problem is with the heart function, medication can be given to the mother that allows the fetus to survive inside the mother until it is born and can undergo surgery or additional therapy.
What happened with Raelyn, however, was the most serious sort of problem. McKinney explains that she was told that Raelyn’s right ventricle was drastically undersized because of a closed pulmonary valve. With this sort of problem, the solution is more complicated.

“It’s a catheterization process on the baby inside mom, which is called a fetal cardiac intervention,” explains John.

In this process, a hollow needle is used to penetrate the mother’s uterine wall. That hollow needle will then go through the amniotic fluid, across the fetal chest and into the baby’s heart. Through that needle are fed tiny wires and balloons. Once the balloon is inside the faulty valve, it can be inflated using the wire as a guide and “pop open” the valve to allow blood flow to occur normally. If the fetus is not lying in a conducive position, it may be necessary to manually shift the fetus into position.

At the time John suggested the process to McKinney, it was a fairly new procedure. About 10 or 15 years ago when it was just getting underway, 75 percent of the babies who underwent the process did not survive, says John. However, not correcting the problem meant that the baby often died in utero or was born with only half a developed heart. Today, more than 75 percent of babies who undergo the treatment have a favorable outcome, says John. Only a few centers in the world perform the process, so when John identifies patients who will need it, he manages the patients at St. Joseph’s Children’s Hospital and flies with them to one of the centers, where he is one of a team of approximately 15 doctors that perform the catheterization. He then tends to the patient after the process and flies back home with them.

McKinney had the process done in Boston.

“We hoped for the best possible outcome, but were prepared for the worst,” she recalls. “It was nerve wracking thinking, ‘OK, I could wake up with a large incision, or a Band-Aid!’ Once we met the team of doctors, we felt very confident. They were all so great, intelligent and put us at ease assuring us they would make every effort to make the procedure as minimally invasive as possible.”

When McKinney woke up from the procedure, she looked down to see nothing more than two Band-Aids in the shape of an X on her tummy. Raelyn had proved to be a perfectly well behaved fetus who positioned herself obligingly. Things had gone so smoothly, in fact, that McKinney was well enough to walk the Freedom Trail in Boston during the next couple of days.

“We knew that we had to wait to see how much growth of Raelyn’s ventricle we would get in the remainder of my pregnancy, but we knew we were on the right track,” McKinney says. “It just felt right, you know?”

Upon their return to Tampa, McKinney had slight contractions caused by the amnio needle and had to take bed rest and medication. Otherwise, the rest of the pregnancy proceeded normally. When Raelyn was born she was delivered by Caesarian and whisked away to the neonatal ICU to be stabilized and given special heart medication. She was then moved to Pediatric Cardiac ICU at St. Joseph’s Children’s Hospital, and McKinney joined her the second she was cleared by her own doctor to check out and head over there. “I was quite stubborn and did this against medical advisement, but I had to be with her,” she says.

Although the catheterization had helped her ventricle grow, Raelyn’s cardiac muscle had thickened while working extra hard prior to the procedure so Raelyn had to undergo open heart surgery to thin out the walls and put in a shunt. During recovery, she briefly had to spend some time dependent on ECMO, a device that pumps the blood out of the body, oxygenates it and returns it into the body.

“Thank God she came off of ECMO quickly!” says McKinney. “After that scare, her recovery continued and she got stronger every day. Finally, after what seemed like an eternity, we were able to bring Raelyn home. She was on a feeding tube at that time, but other than that was doing very well. Before we knew it, she was off the feeding tube, and growing like a little weed.”

At 18 months, Raelyn did not need the shunt anymore and it was closed in St. Joseph’s Children’s Hospital’s pediatric catheterization lab, avoiding another surgery. Today, the 7-year-old plays piano, loves art and school and consults big sister Madison, 17, on all style issues. In matters of the heart, all she needs now are regular appointments with John every nine months. As for John, although he has now seen countless fetal cardiac patients for the 15 years he has been doing this, he can recall during a casual conversation both Raelyn’s name and that she’ll be heading into the second grade.

“We follow the fetus day to day and month to month,” says John. “We’re with patients not only during pregnancy, but as soon as the baby is delivered. These patients require lifelong monitoring. Some require multiple procedures and maybe open heart surgery. We follow them as a fetus, a newborn, after surgery and for the rest of their lives.”

Raelyn has a complete understanding of her medical condition, says her mother, so she gets a bit nervous at appointments knowing she may need treatments in the future.

“But once she sees John, she feels at ease very quickly,” says McKinney. “She trusts him to the fullest.”

John would argue that he is the lucky one.

“I’m one of the few people who gets to love what I do,” he says. “Every week, I see dozens of patients. In the 15 years that I’ve been doing this, I’ve been able to watch patients grow up and lead healthy, delightful, active lives. You get to watch them grow up. I look forward to seeing my first fetal patient graduate from high school.”