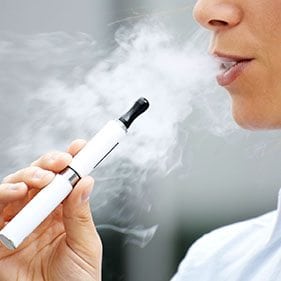 The baby was almost here. His girlfriend was about to start pushing when Billy Knapp dunked his cigarette into the ashtray outside the hospital doors. A habit since he was a teen, the cigarette rested snugly between his pointer and middle finger like he had been smoking for decades instead of just a few years.

Less than an hour later, he watched his son, born with a heart defect, from the window of the NICU. He saw the baby’s labored breaths, pictured the small pink lungs as they filled with air. Watching the intense rise and fall of his son’s chest, he made a decision to quit smoking. He couldn’t imagine breathing sinister smoke-filled breaths into those fragile unassuming lungs.

He would trade cigarettes in favor of an alternative that seemed safer.

Now, one year after his son’s birth, the small blue light glows as Knapp pulls the silver vessel to his lips. He carries his e-cigarette, which resembles a pen, in the pocket of his shirt as he works.

He loves a menthol flavor called “comfortably numb,” and inhales it frequently throughout the day.

“You can get the better vapor at the specialty shops,” he says.

Knapp has joined the millions of young people in America that are opting to use e-cigarettes. While Knapp chose e-cigarettes to help him quit smoking altogether, many young people who have never smoked a traditional cigarette are choosing this electronic option.

“But that does not mean that they are safer,” warns Edelman. “For children, the potential for addiction is great.”

Rather than containing tobacco and producing smoke, e-cigarettes use a cartridge containing flavoring, chemicals and nicotine and produce a water-like vapor. Some look like cigarettes while others resemble pens, and many come in special designs (like the Sonic Screwdriver from ‘Doctor Who’). They contain a rechargeable lithium battery which can be charged via USB, although some brands are disposable. They also contain an atomizer, which consists of a heating coil.

One reason young people opt for e-cigarettes is for the appeal of better health. Not only are e-cigarettes marketed toward people who hope to quit smoking, but they are also advertised as having few health risks.

The lowered health risks are what convinced Patrick Gavin to start smoking e-cigarettes. An employee at a local “vape shop,” he loves e-cigarettes so much that he has five of them. One for every occasion.

“There are 327 different ingredients in a cigarette, over half of which have been known to cause cancer,” says Gavin. “In e-cigs there are two main ingredients and they are both food based.”

The marketing of e-cigs appears to have worked in Gavin’s case; however, Edelman cautions that e-cigarettes are not 100 percent safe, and that parents should not think that they do not cause damage to their teen.

“Smoking [e-cigarettes] is an irritant. It can cause chronic bronchitis, for example,” Edelman says.

E-cigarettes can also be misused, Edelman says. The heating coil can be manipulated, creating higher concentrations of the chemicals per-puff. This can create more carcinogens, in addition to the carcinogens in the liquid.

Like Knapp, many parents have also chosen e-cigarettes to help them quit smoking. However, Edelman warns that e-cigarettes do not always lead to a reduced use of traditional tobacco cigarettes.

“We used to say the same thing about filtered or light cigarettes, so we are skeptical about [e-cigarettes] helping someone to quit smoking,” he says.

Whether a teen is picking up smoking for the first time with an e-cigarette or an adult is trying to quit smoking, one of the big issues with e-cigarettes is the lack of FDA warnings or approval. More than ten months ago, the FDA released a statement that information about e-cigarettes and warnings would be released. Also, hinted-at FDA regulation would mandate listing all the ingredients on the packaging.

However, the information and regulation from the FDA has yet to come to fruition, leaving parents confused and doctors frustrated.

“This is a source of great concern, and we are still waiting for the FDA,” says Edelman.

The FDA has proposed regulations, which the state of Florida has enacted, that ban the sale of e-cigarettes to minors under 18. However, a trip to a local smoke shop revealed flavors that would be appealing to kids, such as Fruit Punch, Red Cherry, Tiramisu and Cocoa. One flavor was described as “hot pancakes on a Sunday morning.” With these appealing flavors, it is no wonder that teens are drawn in, if for nothing other than taste.

Unlike traditional cigarettes, e-cigarettes do not leave behind a strong odor or residue on surfaces. For adults, this is an added bonus– Knapp is able to smoke his e-cigarette indoors in most public establishments, including restaurants and shopping centers. Sometimes, the smell left behind is sweet like a perfume. “They smell good when you exhale,” says Knapp.

However, this lack of traditional odor makes it increasingly difficult for parents to know if their child is smoking an e-cigarette.

“It is not like they are doing narcotics, so there isn’t one tell-tale sign if your child is smoking [an e-cigarette],”says Edelman.

If you suspect your teen may smoke e-cigarettes, Edelman suggests watching for irritability and nausea during a smoke-free day. E-cigarette users may suffer withdrawals if they have to go through a long period of time without smoking, so on a family vacation or on a long day together, try to observe your child’s behavior. If your child is smoking an e-cigarette, whether it has nicotine or is a nicotine free liquid, it should be addressed. Explain to them what the actual health risks are (even if they are smoking a nicotine free vapor) and why they need to stay away from smoking in general.

Frustrations aside, smoking is an addiction and you may need to get help from an outside professional to help your teen quit.

“Prevention is key. In general, healthy active lifestyles help. Kids have less time to smoke and take harmful substances when they are active.”

The research is still ongoing about whether or not e-cigarettes can help you quit smoking, but Knapp is confident about his decision to use them.

“Smoking can set a bad example for your kids, so quit as soon as you can,” he says. “An easy way to do that is using e-cigs. Plus, using one to quit will let you be around for more of their [kids’] lives, and to me that is totally worth it.”