What’s Next: What Happens When Your Baby Has a Stroke 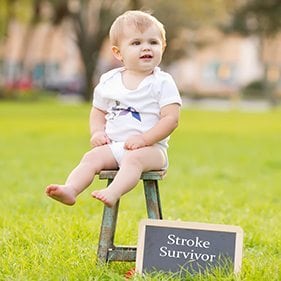 The moonlight was leaking through the cracks in the blinds when Courtney McDarby heard her phone buzz. Bleary eyed and exhausted, she turned over in the hospital bed, spent from having delivered a beautiful baby boy and the subsequent long afternoon unexpectedly filled with unrest. It was 1 a.m.

“He had a stroke,” is all the text message said.

Frustrated, she replied, “why are you telling me about some old man? I only care about our baby.”

And then, all at once it hit her.

Her baby had had a stroke.

All day, she had been afraid. Her first son had such a complicated delivery, surely the second baby would be the same. But Beckett McDarby came with ease, introduced to this world at 10:22 a.m. on February 12, 2014. Beckett was a healthy weight and size, born at full term, and seemingly perfect.

Around 2 p.m., though, when Beckett was nursing, he stopped breathing.

He was rushed to another building in the hospital by ambulance, with little information given. McDarby’s husband, Jason, followed the doctors and nurses who had just helped welcome Beckett into the world, desperate for information, but certain that their little boy was okay. Exhausted, Courtney McDarby decided to try to get some rest while her husband found out what was going on.

Beckett had his first ever MRI just hours after he was born. He also had an ultrasound– his first outside of the womb. The ultrasound found that Beckett had a mass on his brain. The MRI found that he had had an ischemic stroke in the left middle cerebral artery (L-MCA) of his brain.

The MRI also found that he had the stroke during the last week that Courtney was pregnant. He hadn’t even entered the world yet.

Hours later, Beckett had his second stroke while in the hospital, which caused him to turn purple.

The McDarby family is not the first family to go through this scary scenario. In fact, nearly 30 out of every 1000 children has a pediatric or neonatal stroke.

“The incidence is much higher in infants than for regular childhood stroke,” says Dr. Peter Huszar, MD, a neurologist with All Children’s Hospital Johns Hopkins Medicine. Huszar works on the stroke team, which deals with not only preventing future strokes but rehabilitating kids with strokes. He is also part of the team that is helping Beckett.

When McDarby found out how common childhood strokes are, she was shocked. She connected with the Children’s Hemiplegia and Stroke Association (CHASA) and was able to not only learn more about what is to come, but to connect with families that have experienced the same thing.

“It is more common than people realize and the incidence of stroke in infants and children is much higher than previously estimated due to improved medical imaging techniques and an increase in awareness,” says Nancy Atwood, director of CHASA. Atwood and her team at CHASA have been working to not only raise awareness for childhood stroke, but to help families dealing with strokes find a support system.

Pediatric and neonatal stroke can be caused by a variety of different things.

“Some of the most common causes of strokes in kids are congenital heart defects, which are heart defects a child is born with. Some other causes can be autoimmune disorders, blood problems, sickle cell problems and blood vessel injuries,” says Huszar. “Strokes can also be caused by traumatic neck injuries.”

Huszar says that in adults, risk factors such as drug or alcohol use can also cause a stroke, but are less likely causes in children.

One issue with neonatal and pediatric stroke is that many children go undiagnosed. Parents may not know that their child had a stroke while in the womb, or they may not catch the stroke because they aren’t sure what to look for.

“Some prenatal strokes are diagnosed when the baby has seizures shortly after birth, but for children who don’t initially have seizures, the diagnosis is often delayed or missed,” says Atwood.

For many children, especially those that go untreated, cerebral palsy and hemiplegia are just a few of the problems that can arise. Depending on the area of the brain that was affected, children can have learning disabilities, dyslexia, and whole host of other mental and psychological issues.

Some signs to look for if you think your child has had a pediatric or neonatal stroke include seizures and turning blue. When they are babies, you should also try to notice if your child is only rolling over onto one side, or making a fist with one hand. Because their internal organs may be affected, they may also have stomach problems or frequent digestion issues.

Symptoms also tend to come out when the child is tired, like Beckett, whose right side is affected when he’s sleepy.

Your child also should not show a hand preference before 18 months.

Although pediatric stroke is scary, it doesn’t mean the same thing as an adult stroke. A child’s brain is still developing, and children can learn how to do things differently, whereas an adult might lose an ability to do something forever. That’s why Huszar says that it is imperative to get your child treated as soon as possible.

“A child’s brain is quite rubbery, so they can learn how to do things differently even if they had a stroke. They can learn to do things with the other side of their brains that adults with strokes can’t re-learn,” Huszar says. “But about 70 percent of kids with strokes have some kind of abnormality going forward that they need to address.”

Unlike thousands of other children, Beckett was diagnosed, and he was diagnosed early. One of the keys to reversing or repairing damage to your child’s brain is time.

“Time saves,” says Huszar. “That is our motto here.”

At All Children’s Hospital, the stroke team doesn’t only focus on the stroke itself. They specialize in what comes next, after a stroke.

“The hard part is, the first day wasn’t even the worst day. It’s after you know, and the unknown that goes with it. Why did he have it, was it something you did, what will be affected, when will he start to show it, how will he handle it, all of those unknown things are probably the hardest to deal with.” McDarby says.

Beckett is being treated at All Children’s Hospital, where he will receive further testing as he gets older to make sure that his brain is developing properly. His treatment has included taking low doses of caffeine, and many children in his situation are able to be treated with aspirin and other medications depending on the severity of the strokes. He also receives physical, occupational and speech therapy.

Parents like McDarby have found connecting with other families and CHASA to be helpful in the healing process.

“It [CHASA] is the first place I went to when my son got diagnosed, this is the place that I continue to go to as questions arise, and it is the organization that has connected me with a handful of families with stroke/hemi survivor children and organizes events so our children can see that they are not alone in this journey,” McDarby says. “They do this for families in every state across the nation, all as a nonprofit.”

Only time will tell what the future holds for Beckett and the McDarby family, like so many others. With the support of friends and family, and caring doctors who are at the forefront of medicine, the future for pediatric and neonatal stroke patients does not have to be dark.

For more information on the stroke team at All Children’s Hospital, visit AllKids.org. To find out how to get involved and how CHASA can help you, visit CHASA.org.